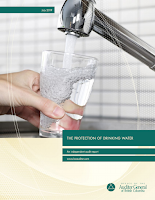 The importance of safe drinking water, a topic that should catch the eye of many in Prince Rupert considering the events of earlier this year, was the guiding focus for a report released today by Carol Bellringer, the Auditor General for British Columbia, who reviewed the oversight related to the drinking water of the province and in some cases found much room for improvement.

Oversight of drinking water is very complex, involving 23 pieces of legislation and many ministries and agencies. To ensure clear accountability, government stated that the Ministry of Health (Health) would provide the leadership and coordination of the many ministries involved. However, over time, Health’s leadership has waned.

As a result, most coordinating bodies have disbanded, there is no strategic plan to guide the direction of drinking water protection, and efforts to protect small water systems have been limited. Health has undertaken some action but more needs to be done.

Given the complexity of drinking water protection and the challenges faced by the Ministry of Health, it is time for government to clearly articulate roles and ensure that ministries and agencies are held accountable. -- From the Executive Summary of the Auditor General's Report on the protection of Drinking water.

For the 2019 Audit, the Auditor-General's office focused on three pillars that the government has established to protect drinking water:

1. Leadership and coordination by Health

2. Actions by Health and the PHO

3. Accountability of Health and the PHO

From the Report the Auditor General notes:

We concluded that Health and the PHO are not taking the needed actions to protect drinking water for all British Columbians. However, Health had taken a number of actions, including developing guidance documents and working with some of its partners to advance an approach to identifying and mitigating risks.

The PHO had not demonstrated adequate oversight of drinking water officers, nor had the Office of the PHO been able to show the tracking and resolution of significant impediments to drinking water protection. 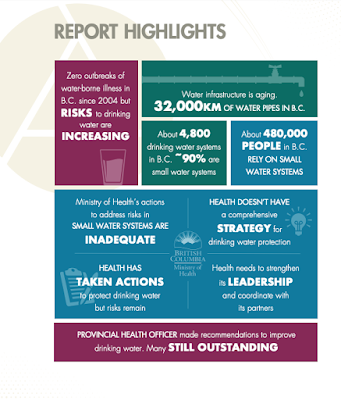 The report reviews the leadership of the Ministry of Health when it comes to legislation to protect drinking water as well as the actions of the Public Health Officer, providing for eight recommendations, which both bodies delivered responses towards. 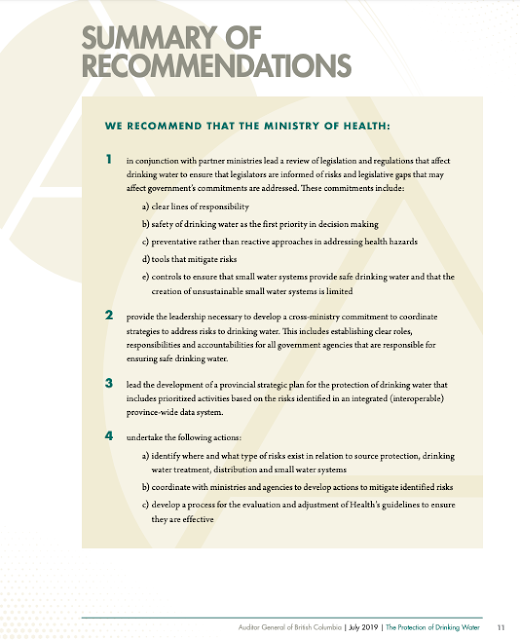 The report outlines how the risks to drinking water are increasing whether it be the demand of a growing population, industrial practices or proximity to agricultural areas of the province, it also explores how climate change is expected to impact the province and could impact on the quality and quantity of drinking water available to the public. 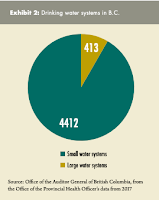 The majority of the report is focused on the smaller water systems of the province those which serve fewer than 500 people in a twenty four hour period. It's estimated that 480,000 residents rely on those small water systems.

The report however notes that attention to all of the province's water systems is required to ensure that all proper safety measures are being followed up on regularly.

Much of the data reviewed was taken up to the year 2017, with the good news delivered that no known outbreak of water borne illness has been recorded in BC since 2004.

However as the Auditor General has found there's much to be done when it comes to accountability from both the Ministry and Public Health officer, with few of the recommendations from a string of previous reports over a number of years yet to be acted on.

The report which you can read here, comes with a video presentation from the Auditor General's Office which condenses the report and makes use of graphics to deliver the key elements.

Themes that the City of Prince Rupert may find helpful as they address local concerns.

While not noted in the AG report today, Prince Rupert has seen some past water issues of note, earlier this year a false-positive report on the city's drinking water had residents boiling their water for close to six weeks much of it over the holiday period, before the all clear was finally issued in March.

In May, the City of Prince Rupert and Northern Health issued a call for volunteers to test the quality of their home water.

The survey which was hosted by the Rupert Talks program is now listed as CLOSED, however so far, no details related to the findings have been released.

In 2016, School District 52 sent out advisories to the parents related to elevated levels of lead in the water found at a number of local schools, at the time North Coast MLA Jennifer Rice issued a statement calling for increased testing for lead exposure in other schools across the region.

And while the school issue took place under the watch of the previous Liberal government, as the Attorney General's report indicates, there is still much work ahead for the NDP government towards keeping a watch on the province's water systems.

For more items of note related to the Provincial government see our archive page here, other notes on the larger provincial scene see our political blog D'Arcy McGee.

Email ThisBlogThis!Share to TwitterShare to FacebookShare to Pinterest
Labels: AG Report on drinking water in BC