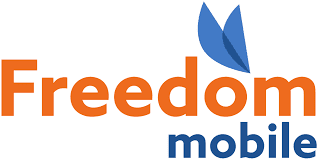 The teaser campaigns of the last few months are about to come to an end, as Prince Rupert prepares for the arrival of a new cellular phone service, with Freedom Mobile putting in motion their plans to introduce their service on Wednesday, July 31st.

The debut of the newest cellular option for Prince Rupert residents is just one of a number of launches in communities around British Columbia, with Kelowna service to be activated the same day, while other communities in the Interior and on Vancouver Island join the Freedom line up in August.

We introduced our readers to the Freedom plans back in May, with one of their main selling points for their service that of their data packages.

Freedom mobile is owned by Shaw Communications and in addition to their move in British Columbia, the service has been on an extensive expansion program in Ontario and Alberta 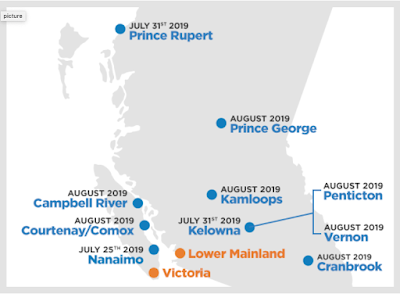 In Prince Rupert, the local service centre is Data Boy on Fourth Street, which will serve as the contact point for Freedom in the region, they will be able to explain the full coverage area that the service will provide for.

As well, the local contact can offer up a review of the range of options that make for the Freedom wireless program and match customers up with equipment and the air time that will work the best for their requirements.

Freedom's technicians have been in the area since late June testing equipment in anticipation of the July 31st launch for the service on the North Coast. 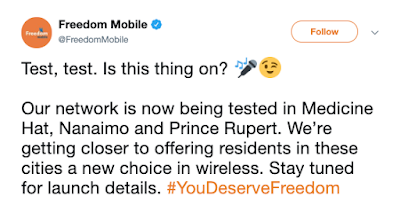 The Freedom coverage includes all of the Prince Rupert area from the Industrial park, through the downtown core and to Fairview Terminal as within their range of service. Also noted on the map is the Digby Island Airport and Metlakatla.

You can learn more about their launch in Prince Rupert here.

For more items of note on communications in the Northwest see our archive page here.

To return to the most recent blog posting of the day, click here.
Posted by . at 9:18 AM