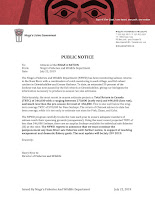 The numbers coming in continue to provide a snapshot of the concerns for the North Coast fishery this year, with the Nisga'a Fisheries and Wildlife Department providing a look at the salmon returns on the Nass River system and how the low numbers mean a continued postponement of the Sale Fisheries from the River.

In an information release of Monday the Nisga'a Nation outlined the findings of those at the Fish Wheels of Gitwinksihlkw and Grease Harbour which have seen 59 percent of the sockeye run having now passed by.

From their review, the Nisga'a Fisheries and Wildlife Department notes that total returns to Canada has been pegged at 346,000, which is significantly less than the pre-season forecast of 456,000.

They also note that is well below the long-term average Total Return to Canada of 570,000 for Nass Sockeye. When it comes to other species, the Nisga'a officials note that the Chinook run has been average, while they observe that it is still too early to estimate the run sizes for Pink, Chum and Salmon.

As for the sockeye numbers, after reviewing the data, the Nisga'a Fisheries officials have determined that there are no surplus sockeye available for individual sale fisheries at this time, offering the following advisory to their residents.

The NFWD regrets to announce that we must continue the postponement of any Nass River Sale Fisheries until further notice, in support of reaching escapement and domestic fishery goals.

Monday's notes from the Nisga'a follow a public notice from earlier this month which outlined previous closures of sale fisheries in the region.

The next update from the Nisga'a officials is expected on July 29th.

More background on items of interest from the Nass Valley can be found here.

While an overview of the fishery on the North Coast is available here.