Parents hustled their youngsters indoors on Monday afternoon as a somewhat rare occurrence of a thunder storm rolled across the city from west to east,  making the direction of Lax Kw'alaams the apparent focus for its full impact on the day.

The afternoon event saw the skies darken quickly and the winds pick up, that as thunder first rumbled a little after 3:30 PM with occasional flashes of lightning seen before it had move on about one hour later.

While there was a short period of rain, no measurable amount of precipitation fell during the course of the storm's transit through the region.

The afternoon thunder had been forecast by Environment Canada, which continues to note that there is a chance of thundershowers continuing on into the evening period. 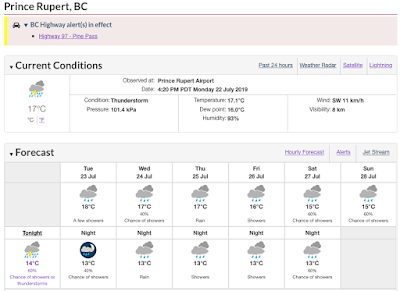 Update: Prince Rupert appears to have avoided some of the troubles found in other areas of the Northwest owing to the storm,  power was reported as out in many areas including the Terrace area where reports of trees  and downed power lines were called in during the evening. To the north, the same was reported in Ketchikan, Alaska where much of the community was without power. Power lines were also reported as down in the Stewart area, which closed Highway 37 for a period of time.


Past weather related notes can be explored from our archive page.