An investigation has been launched by the Canadian Transportation Safety Board into the circumstances that led to the crash of a Float plane on Addenbroke Island on the Central Coast Friday, which tragically took the lives of four and has sent another five to hospital.

The flight had departed from Vancouver on Friday morning and was  destined for the nearby Calvert Islands and a fishing lodge on the island, it crashed around 11 AM, with weather at the time listed as featuring intense rain.

The Canadian Transportation Safety Board made note of the investigative plans over the weekend, with a team now on site to review the crash site and all elements of the flight 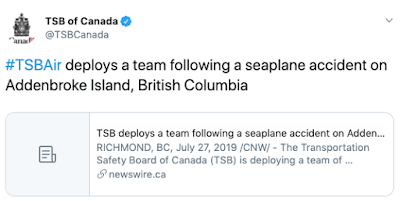 Also assisting in the response were members of the RCMP out of Bella Bella, as well as a number of vessels in the area, including the BC Ferry Northern Sea Wolf, which was in the region as part of its transit from Port Hardy to Bella Bella and other central coast communities.

Late Friday afternoon, the Premier offered his condolences on the incident and thanked those that responded to it.

Some of the latest notes on Friday's incident can be reviewed below: