Progress for a proposed Wind Farm project off the east coast of Haida Gwaii awaits some guidance and approval from the Province when it comes to their hopes to launch the investigative phase of the project which was first outlined by Naikun Wind Development as an energy option more than a decade ago.

The area of interest for Naikun is a 4397 Hectare area off of Naikoon Point, which should the project go ahead would generate 400 to 600 MW of clean renewable energy with the capacity to serve up to 130,000 homes.


The energy generated from the site would be connected to the BCTC Grid near Prince Rupert and near Tlell on Haida Gwaii.

During the initial preliminary studies, Naikun has selected a high-voltage cable to transmit power from the wind farm towards Haida Gwaii, the HV system will provide ample capacity for the for the permitted wind generation project and a grid connection to Haida Gwaii to allow the Islands to get off diesel power and undertake the on-island renewable energy projects. 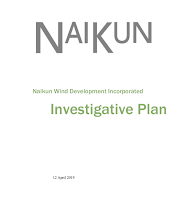 Naikun has met the requirements of the CEAA and successfully concluded the harmonized environmental assessment review process.

It most recently was the subject of a public comment period which took place from May 9 to June 7th.

Much of the future for the project will however hinge on a contract award to deliver power to BC Hydro, Naikun was unsuccessful in a Call for Power process from 20018-2010; it's not currently know when BC Hydro and the Province may offer the next opportunity for such calls for power.

Naikun notes in their documentation that are working diligently for alternatives to move forward with the project. As they await further feedback from the province on their plans towards the investigative phase, the company is also committing to remaining engaged with First Nations, with a focus on the Haida Nation.

Details on the project can be reviewed here and here.

For more items of interest on Alternative Energy proposals for the region see our archive page here.

Additional items of note from Haida Gwaii are available here.
Posted by . at 9:37 AM