Prince Rupert RCMP are asking for the assistance of the public as they investigate what they are calling a suspicious incident in the 400 Block of Third Avenue West.

While they don't identify the building by name, it does appear from photos provided by the detachment to be the back side of Prince Rupert City Hall. the  area of interest that of the alleyway between the building and that of DFO/Canada Post.

Video surveillance has captured a black lifted Chevrolet Pick Up roll up to the building at approximately 9:45 PM on Thursday, July 25th.

The RCMP outline how the video shows two men get out of the the vehicle, with one man climbing onto the building which resulted in some damage. The other man of interest in the incident stood in the parking lot watching.

The Two suspects are described as follows:

A second photo of the man climbing on to the building can be viewed below: 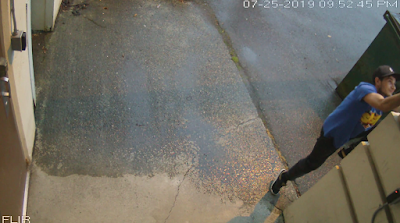 A photo of the truck in question can be viewed below: 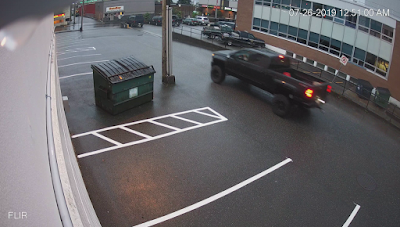 More on the case file can be reviewed here.