After a four month search, the District of Port Edward has found the right candidate to fill the role of Chief Administrative Officer, announcing the hiring of Danielle Myles Wilson who will depart her current post as Manager of Economic development for the City of Terrace to join senior staff in the District.

The announcement was made by Mayor Knut Bjorndal last week, with the District posting the notice of the hiring to their website. 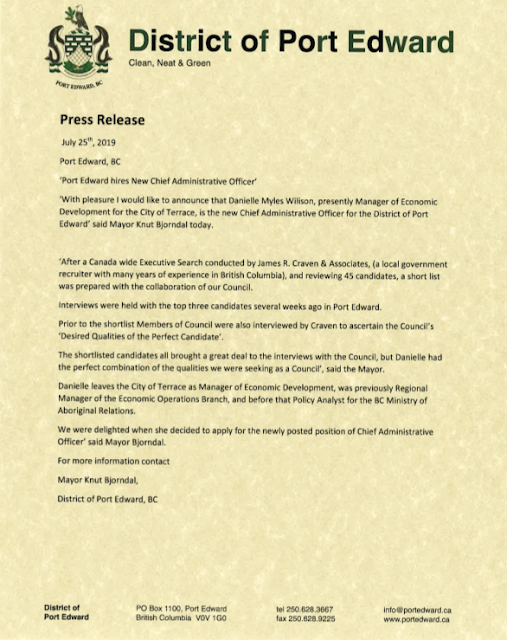 In the notice, the Mayor observes that the Ms. Wilson was one of forty five candidates identified for the job by the Executive Search firm of James R Craven and Associates. The corporate recruiters then provided a short list for the mayor and Council to consider.

In addition to her work with the Terrace Economic Development office, Ms. Wilson has previous experience as the Regional Manager for the Economic Operations Branch as well as serving as a policy analyst for the BC Ministry of Aboriginal Relations.

The Chief Administration Officer position became open in March of this year, when former District CAO Bob Payette brought his five years of service to Port Edward to a close, that as he relocated to Southern Alberta to be closer to his family.

Ms. Wilson is anticipated to take up her new duties with the District in September.

For more items of interest related to the District of Port Edward see our archive page here.