It's not quite a Royal Commission of Inquiry, but the recently announced sale of Ridley Terminals to a pair of American equity investors has given Skeena-Bulkley Valley MP Nathan Cullen some cause to raise an online flag or two on the theme.

The soon to be retired MP from the Northwest, took to his Social media pages on Monday, with a few thoughts on the pending sale to the two American firms Riverstone and AMCI which hs reached an agreement with the Canada Development Investment Corporation, to buy Ridley Terminals for $350 million dollars.

As part of the negotiations, both the Metlakatla First Nation and Lax Kw'alaams Band will retain a ten percent interest in the new terminal ownership as part of a limited partnership.

Of note to Mr. Cullen, the timing of the sale with a federal election on the horizon, the rather low price for the deal following significant investment by the government, as well as what kind of guarantee for access to Canadian shippers may remain with new ownership. 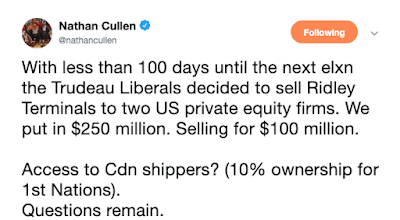 Mr. Cullen's observations on the financials of the deal are particularly interesting to take note of, particularly after reviewing part of a Globe and Mail story from last week.

As part of the national newspapers reporting on the sale, it was noted that when the idea of putting Ridley on the market was first considered back in 2012, the potential return for the terminal was anticipated to be in the billion dollar range.

However the mercurial nature of the coal industry and other economic factors seem to have delivered a much reduced final tally for the Federal government as it exits the coal export business.

Also of note for the new ownership, and perhaps a contributing factor towards the final purchase price, might have been the result of the findings of an Auditor Generals report on governance and oversight of the terminal from 2018.

That report proved to be a fairly scathing look at corporate governance and communication difficulties between the Ridley Board and Transport Canada.

In June RTI provided a glimpse at their annual financial statement for the last year which saw 117 million dollars in revenue recorded, with a net operating income of 47 million dollars.

You can review the range of financial information from RTI here.

So far, when it comes to any kind of comment on the sale,  Mr. Cullen is the only area politician to offer up some thoughts on the deal from Friday.

North Coast MLA Jennifer Rice, did make mention of the sale on Friday afternoon, re-tweeting a news story on the sale, but offering no insight from her perspective when it comes to the sale of one of the region's largest employers to American interests. 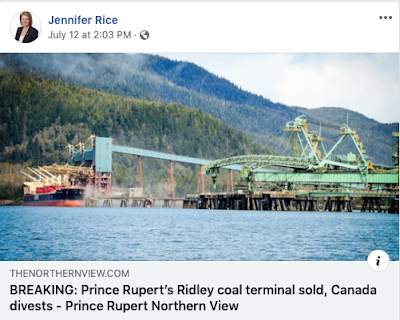 Likewise, there have been no comments from anyone at Prince Rupert City Hall when it comes to a significant shift in focus for the industrial footprint of the region.

As we noted in September of 2018, the potential sale of RTI had been a topic of discussion for the city' elected officials.

Standing out from that time was a quote from Councillor Barry Cunningham who had suggested that as part of a letter that Council was to be forward to the Federal government, that the line of "as long as it remains in Canadian hands" should be part of the correspondence.

As part of those discussions, Council issued the following guidelines for City staff when it came to the letter for the Feds.

"That Council directs staff to write a letter to the Federal Government opposing the sale of Ridley Island with the exception that if the sale goes to local ownership, for example say local First Nations are interested in purchasing it, or a Canadian company that is interested in remaining committed to the Canadian economy"

To this point however, those members of Council who regularly speak out through social media on local issues, have yet to make mention of the sale or how they view the acquisition by the American firms.

You can review our original notes on the RTI sale of Friday here.

For more items of note on Ridley Terminals see our archive page here.

To return to the most recent blog posting of the day, click here.
Posted by . at 1:48 PM

Email ThisBlogThis!Share to TwitterShare to FacebookShare to Pinterest
Labels: Cullen on Ridley Sale