City's Water/Airport Ferry Needs result in higher cost to May 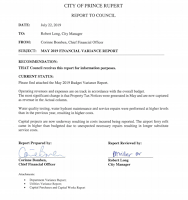 Some additional expenses have boosted the expenditures side of the City of Prince Rupert Financial ledger so far this year, particularly when it comes to the city's water supply and Airport Ferry Transportation system.

The review of the need for additional cash for both was outlined Monday, as the City's Financial Officer Corrine Bomben delivered the May Financial Variance Report at this month's City Council Session.

Two areas were highlighted as delivering a significant variance, with Ms. Bomben first outlining that when it comes to the City's Water System expenditures, the costs are up owing to higher service repairs and more water quality testing being conducted.

From the Variance report the water expenditures are closing in on the million dollar mark, with the May numbers noting $957,8233 required to that point, which makes for an increase in spending from this time last year of $231,491.

The amount spent to the month of May is close to half the budgeted amount that the city had estimated for the year.

The need for more water quality testing came following the city's drinking water issues of late December and earlier this year.  That after an original test delivered what the city described as a False Positive.

That resulted in a three month Boil Water order being place on the city's drinking water.

The Airport Ferry also required more money than originally planned for, with the Airport Ferry refit resulting in additional expenditures required for the refit, that after unexpected and necessary repairs were discovered during refit.

Those repairs and the extended period of time for the substitute barge service from Wainwright Marine provided for the cause of the bump in financial resources required.

The Airport Ferry was taken out of service in March and then transited to Victoria for its refit, in April the CFO outlined that more money would be required for the refit, with an additional 350,000 dollars required on top of the previous $611,000 allocated for the work and substitute barge from Wainwright Marine.

According to the May Report, the City had budgeted one million dollars for the project, with the actual cost of the Airport Ferry refit as of May 31st listed at $1,190,729 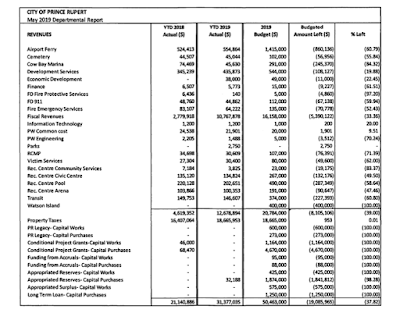 You can review her full report on those items and others from the City's You Tube Video archive page, the Variance Report notes come at the twenty one minute mark.

For more items of note related to Monday's City Council Session see our Council Timeline Feature here,  further background on the Monday session is also available from our Archive here.

A wider overview of Council discussions can be explored through our Council Discussions archive.
Posted by . at 9:40 AM

Email ThisBlogThis!Share to TwitterShare to FacebookShare to Pinterest
Labels: May Variances for Water and Airport Ferry