An update delivered by Metlakatla Aquatic Resources on Thursday highlights some of the growing concerns over the fate of this summer's sockeye fishery, with the Metlakatla Resources office noting that the situation has now become that of a conservation concern.

Metlakatla posted the update to their Facebook page on Thursday morning with the numbers from the Tyee Test Fishery indicating to this point, only 86,065 sockeye have gone past the Tyee marker.

They also note that returns in the Nass are also tracking below average.

With the growing concern over the numbers, Metlakatla notes that DFO has begun consultation with regional First nations that target the Skeena salmon stocks. 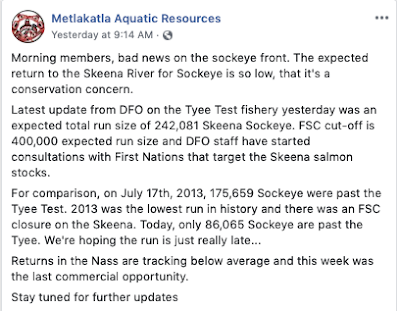 Just over a week ago,  we made note of some of the closures and catch reductions that the Department of Fisheries had issued for both tidal and freshwater fishing on the North Coast.

The latest updates to DFO's Fishery Notices can be found here. 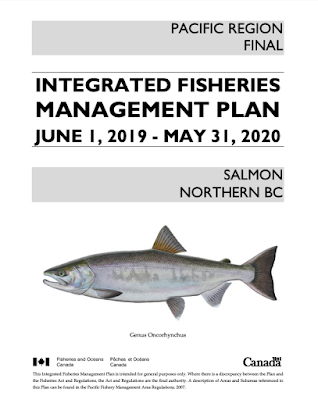 Earlier today, DFO released the details of their Integrated Fisheries Management plan for Northern waters, the background to the plan can be examined here.

More notes on the North Coast fishery can be explored here.

To return to the most recent blog posting of the day, click here.
Posted by . at 3:55 PM