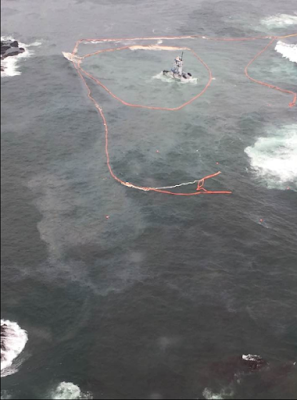 Tuesday was judgment day for the criminal case related to the 2016 sinking of the Nathan E Stewart, with the company assessed a fine of $2.9 Million dollars, an amount that has left the Heiltsuk Nation extremely disappointed and frustrated and has led to a call for proper restitution according to their traditional laws.

Judge Brent Hoy conducted the sentencing held in the Community on Tuesday, which saw the Texas owned tug and towing company facing nine charges as a result of the incident which left much of the Heiltsuk territorial waters fouled. 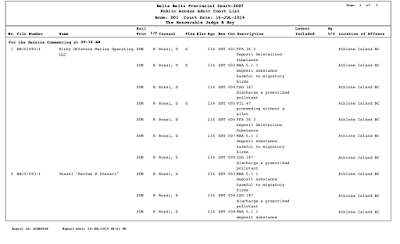 In an information release following the sentencing, Marilyn Slett, Chief Councillor of the Heiltsuk Nation expressed the frustration of the community at how the process of seeking justice has taken place over the last three years.

“Today’s sentencing was a far cry from real justice. Despite pleading guilty, Kirby Corporation still doesn’t seem to care. As we speak, they are waging an expensive and complex legal effort to split our civil case between two different courts, and to exhaust our resources in order to drastically limit their liability instead of compensating us for harms to our aboriginal rights and title.”

The Heiltsuk have also outlined their next steps in their efforts against the Texas company, with an open letter published, as well as an advertising and social media campaign that will ask the simple question of "Does Kirby care?"

The Open Letter to Kirby Corporation CEO David Grzebinski can be viewed here.


Learn more about the campaign to seek accountability here.

The sentencing session of Tuesday also provided the Heiltsuk with another opportunity to remind Canadians that there is still an inadequate oil response program in place on the shores of British Columbia as well as an system of compensation that is lacking for the communities that are the most affected.

“Kirby Corporation is a multi-billion dollar American company, and yet it is Heiltsuk that has been on the hook for environmental assessment and remediation costs, while attempting to obtain compensation. This is a stark reminder for all coastal communities that Canada does not have world-class oil spill response, or an adequate compensation system for the victims of oil spills.” -- Marilyn Slett, Chief Councillor of the Heiltsuk Nation

The Heiltsuk have also launched a separate Civil Claim against Kirby Offshore Marine Corporation to cover the costs of environmental impact assessment, remediation and compensation for communal harvest and cultural damages (things not covered by a criminal sentence), and they have pledged to fight for justice on behalf of all Canadian communities that might face the consequences of an oil spill.

More background related to those efforts can be explored here.

North Coast MLA Jennifer Rice was in Bella Bella this week, but to this point has not provided for any comment through her social media stream related to the fine assessed to Kirby.

Skeena-Bulkley Valley MP Nathan Cullen however did have a few comments to make on Tuesday's court proceedings, referring to the fine assessed to Kirby by the court as a "joke"

Our notes of interest at the time of the incident of 2016 can be found here.