Federal Liberals to send Dave Birdi to the campaign trail

There is one more name to add to the list of candidates for the upcoming Federal Election, with the Federal Liberals announcing that Dave Birdi will be contesting the Skeena-Bulkley Valley seat on behalf of the "Trudeau Team".

Hailing from Fort St. James, Mr. Birdi is President of the Fort St. James TV and Radio Society, as well as having served on the town council for over ten years.

His resume includes six years as Director of Community Futures Stuart Nechako branch, with his biography noting that he is currently the Economic Development Officer of Binche Whut'enne.

Mr. Birdi introduced himself and announced some of his campaign themes yesterday with a fairly lengthy press release by way of his Facebook page, which you can review here.

He notes that he is anxious to get on the campaign trail across Skeena-Bulkley Bally to speak to the many important issues facing residents of the region.

The Liberal Party's official announcement of Mr. Birdi's selection was released on July 23rd as well.

While the candidate is doing an admirable job of getting the word out ...

The Liberal head office however does not seem to know too much about their own candidate just yet, with his place marker on the official Team Trudeau site, somewhat limited in Biography, social media links or even a photo of their chosen candidate. 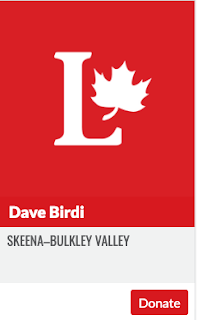 You can however donate to the Liberal campaign, with the donation button in good working order. 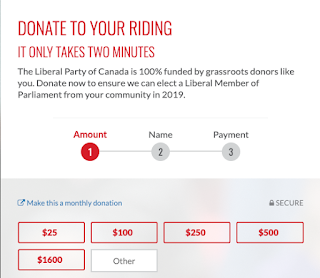 Mr. Birdi makes for the fifth entry so far in the upcoming electoral contest, already nominated and out on the campaign trail are:

The Green Party has yet to announce who will be their candidate in the fall election.

You can keep up to date on developments along the campaign trail from our Skeena-Bulkley Valley Archive page here.
Posted by . at 10:41 AM