A new 50/50 partnership created in May is leading the way towards a Renewable energy future for Haida Gwaii with the Skidegate Band Council and Old Massett Village Council recently introducing their new venture Tll Yahda Energy. “Tll Yahda”, Make It Right

Known as TYE the new partnership will work with the existing Moresby Lake Generating Station  hydro asset owner Atlantic Power along with clean energy developer NRStor to take on the new energy vision through a phased in approach.

Leadership in both communities have hailed the new arrangement as a project that will help to migrate the Islands towards a greener future.

“It’s a very exciting time for Haida Gwaii and the timing is right to do our part as we move to Renewable Energy,”  -- Chief Councillor Billy Yovanovich, Skidegate Band Council.

The first phase of the project has been designed to enable community ownership of an existing hydro deploy new solar generation and energy storage, enabling significant community ownership and local economic as well as environmental benefits to be achieved.
asset and

The partners have introduced the first phase of the project with support from Natural Resource Canada, which provided $10.4 million in funding for the project.

Some of the key elements of the project include:

The Natural Resources Canada backgrounder on the project is available here.

You can review more notes on the launch of the program here.

As part of the new partnership, TYE has issued a call for submission through a logo contest that will reflect the new energy vision that they are hoping to deliver on for the Islands. 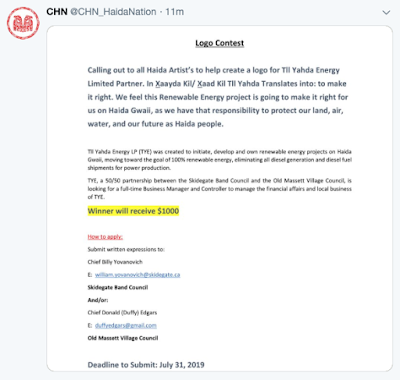 More notes on news and initiatives from the Council of the Haida Nation can be found from their website and Facebook page.

Renewable energy initiatives for Haida Gwaii are quickly becoming one of the more active areas of development for the Islands.

As we outlined earlier this week, a wind farm proposal from Naikun Wind Development is currently awaiting approval towards an investigative project off the east coast of the Islands.

The growing interest in development of alternative energy options for the Northwest and Haida Gwaii can be reviewed here.

For more items of note on events from Haida Gwaii see our archive page here.

To return to the most recent blog posting of the day, click here.
Posted by . at 11:16 AM