After close to thirty four months since the Nathan E. Stewart sank off the coast of Bella Bella, the end of the criminal case work related to the environmental incident is about to provide for sentencing, with court proceedings scheduled in Bella Bella for Tuesday morning.

The sentencing phase comes after the Crown and Kirby negotiated a settlement which will see the Texas based tug company plead guilty to three of the nine counts originally laid out.

According to the Heiltsuk, Kirby entered into a plea agreement with the Crown in May of this year and plead guilty to the following:

One count of the Migratory Birds Convention Act

One count of Fisheries Act

One count of the Pilotage Act

Kirby and the Crown will present a joint statement on the penalty while be delivered to the judge during the sentencing hearing.


The Heiltsuk Tribal Council notes in a post to their Facebook page that as the case was a criminal matter, the Heiltsuk were not advised of the court proceedings. 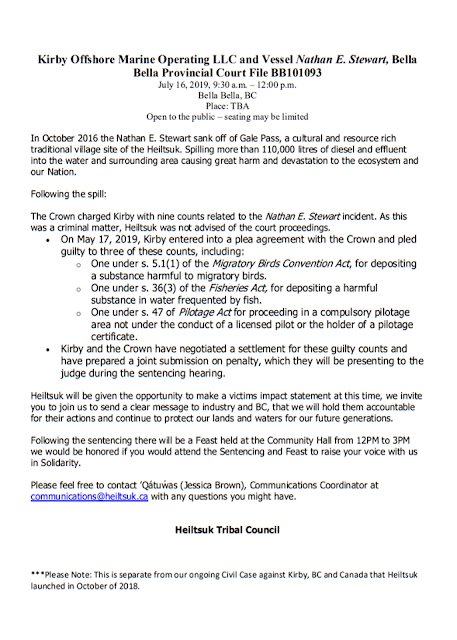 As part of the sentencing process for tomorrow, the Heiltsuk will be given the opportunity to make a victims impact statement, with the Tribal Council urging its membership to deliver a clear message to Industry and the provincial government that they will be held accountable for their actions, as well as to reinforce the message of continued protection of their lands and waters for future generations.

Updates posted to the Heiltsuk First nation website and Social Media streams today provide a look at the path ahead for the sentencing process:

Heitlsuk members will gather this evening at 6PM at the United Church for a film screening and information session, with an outline as to how the hearing will take place part of this evening's program.

Members also plan to create posters to clearly outline their position and the impact of the incident of October 2016.

The Court Date takes place at 9:30 Tuesday morning, with the proceedings taking place in the Wawiskas Community Hall, the sentencing hearing is open to the public but residents/members are advised that seating is limited.

Following the court session, the Heiltsuk will be hosting a Feast at the Community, the full details on the day's Agenda can be explored here.

The Heiltsuk continue on with their own civil case related to the events of October 2016.

The Canadian Transportation Safety Board Report was released in November of 2018.

To return to the most recent blog posting of the day, click here.
Posted by . at 3:21 PM