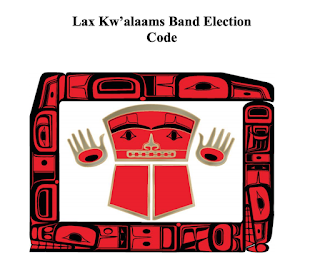 The official results of a referendum ballot in Lax Kw'alaaams have been released and by a slim margin of four ballots, voters have chosen not to move forward with proposed amendments to the Lax Kw'alaams Election regulations.

In an information release on Monday, Lax Kw'alaams officials noted that in total 265 ballots were cast, with 134 voters registering their opposition to the amendments, while 130 were in favour of them, one ballot was spoiled. 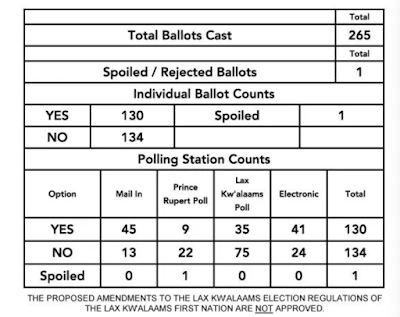 Twenty five proposed amendments had been outlined to Lax Kw'alaams residents earlier this year, included among some of the changes were implementing a progressive discipline process for electoral and conduct disputes, offering electronic voting and requiring criminal checks for would be councillors. 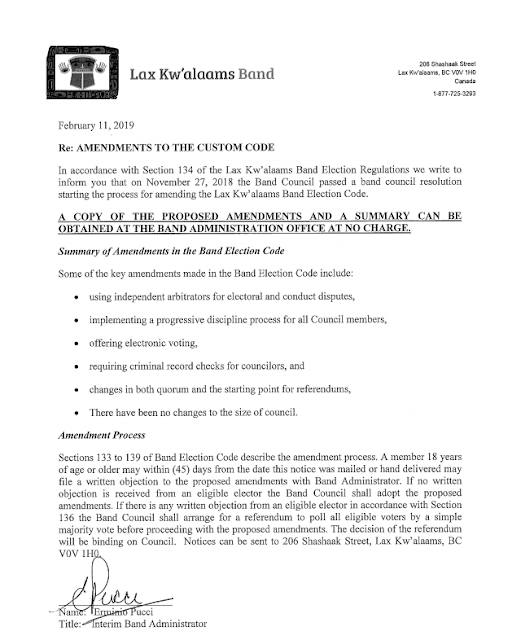 The full summary of the proposed and now defeated changes can be reviewed here.

The referendum was conducted on July 18th with voting taking place both in Lax Kw'alaams and at the Lax Kw'alaams Business Development office in Prince Rupert. Voters could also participate by mail in ballot or electronically.

From the results 65 members chose the electronic method, 58 mailed in their ballots with the remainder of the 265 votes cast in person at the two ballot locations.

For more items of interest from Lax Kw'alaams see our archive page here.