The members of the Coast Tsimshian Nation will now be working as one when it comes towards the management and protection of the environment within their traditional territory, that as a result of what the Lax Kw'alaams Band and Metlakatla First Nation hail as a historic agreement signed earlier this month.

An information release from today outlined the details of the agreement which was signed on July 15th by Mayor John Helin of Lax Kw'alaams and Chief Councillor Harold Leighton of Metlakatla, confirming their commitment to work towards accomplishing the stewardship goals that are deemed a priority by the Coast Tsimshian.

As part of the new protocol, and taking direction from Mayor and Chief,  the two communities will commit their combined expertise and resources to work, making use of the Metlakatla Stewardship Society and that of Lax Kw'alaams Integrated Resources to defend the rich resources and pristine environment.

The two agencies will take to their work through both enforcement and research activities.

"Working together allows us to better protect our environment. We have always said that we need to do more to protect our lands and waters, and this is putting those words into action,” -- Lax Kw’alaams Mayor John Helin. 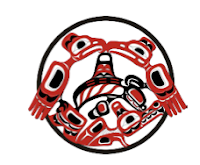 "This is what our members want - they want us to protect our environment and this agreement will only strengthen our ability to do that in our traditional territory,”  -- Metlakatla Chief Harold Leighton.

The statement from the two leaders also noted how the signing of the agreement comes amidst some increased pressure on the North Coast from industry and other stakeholders who see benefits of operating in the Coast Tsimshian territory.

Some of those pressures are being felt as the industrial footprint of the Port of Prince Rupert continues to expand around the region; as well as some interest out of the Nass Valley towards a controversial area of the Nasoga Gulf in Portland canal.

That still unresolved issue has seen the coast Tsimshian protest a proposed sale of Crown land to the Nisga'a Lisims Government which is looking to develop the region, some of the background to those issues can be explored here.

See our archive pages below, for more items of interest related to both the Lax Kw'alaams Band and Metlakatla First Nation

Email ThisBlogThis!Share to TwitterShare to FacebookShare to Pinterest
Labels: Lax Kwalaams and Metlakatla to work together on environmental and development issues