1,000 new workers have taken up employment with the Port of Prince Rupert since 2016, many of the new jobs created on the North Coast, though a growing number of employment opportunities are being realized across the northern corridor.

That is just one of a number of key takeaways from a new report released by the Port of Prince Rupert today which highlights the impact of Port Development not only on the City of Prince Rupert but all of Northern British Columbia.

The surge in jobs comes as the Port of Prince Rupert reports that 6200 jobs are now to be found through the movement of trade through the province to the shipping terminals at Prince Rupert.

The report was compiled by InterVistas and studied a range of factors to determine the role that the port plays in the development of Western Canada's economy.

The 2018 totals indicate some of the factors that have led to the significant economic and employment benefits for the region, based on the 26.7 million tonnes of product that were shipped last year.

The value of that trade was set at approximately $50 Billion and created 1.5 Billion dollars of economic activity in the region. 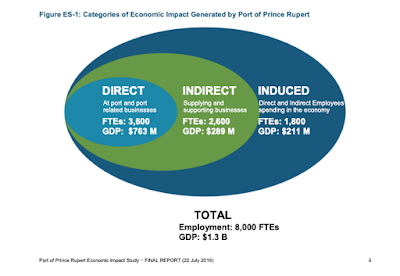 The report makes note of how that trade has created jobs stating:

The businesses and organizations involved in marine, terminal, rail, truck logistics and other activities required to safely move goods through the region employed 3600 full time equivalent jobs, and the contracted services and supplies required by those businesses (i.e. indirect employment), generated another 2600 jobs. Although many of the total 6200 jobs are located in the Prince Rupert area, thousands of women and men find employment as residents of communities throughout northern BC.

Annual wages associated with that employment totalled $481 million and the average annual wage rose to $87,200 in 2018.

As the charts below indicate, the majority of the jobs are permanent in nature, providing for stable, year round employment . 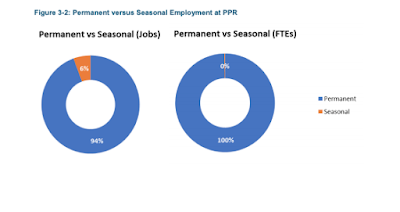 The bulk of the job opportunities come through rail and trucking operations as well as the work taking place through terminal and stevedoring operations on the Prince Rupert waterfront. 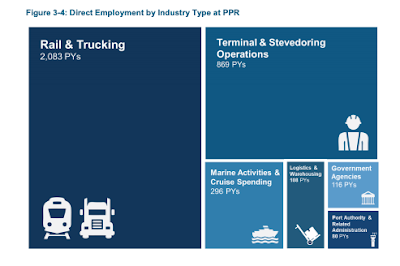 For  government at all levels the port's success is also translating into financial benefits, with 125 million dollars in annual tax revenues delivered through stipends, personal tax, corporate tax and property tax revenues.

The Canadian and BC governments were the largest recipients, but property taxes generated from PRPA lands increased to $9.3 million in revenues for local government as well. 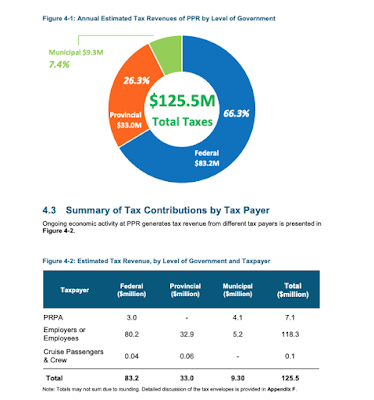 “The Port of Prince Rupert’s success is built on the hard work of the women and men that contribute to moving cargo efficiently and safely through the gateway every day, building our global reputation for innovation and reliability. Northern BC is our home. We’re proud of the economic benefits we’ve been able to cultivate with all of our partners over the last decade.

As we look to the future, we are optimistic that we will collectively continue to deliver a globally competitive trade corridor for BC and Canadian exporters, and reap the economic benefits from it, given the Prince Rupert Gateway’s strategic advantages and demonstrated track record.” -- Shaun Stevenson, President and CEO of the Prince Rupert Port Authority. “

The Direct impact of growing trade opportunities and employment increases is highlighted by the following graph which charts the increases found since 2009. 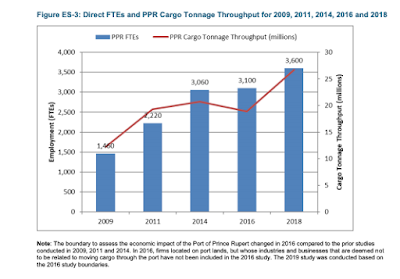 Compared to the most recent economic impact study compiled in 2016, the economic indicators across the board show a significant upward trend, which reflects for a 40 percent increase in port volumes during that two year period.

The report digs deep into the data, providing a very comprehensive glimpse into the both the growth of the port and its operations, as well as the impact that it is delivering, both in employment, injection into the local economy and financial benefit provided to all levels of government.

You can review the full report on the economic impact here.

For more items of note about the Port of Prince Rupert see our archive page here.