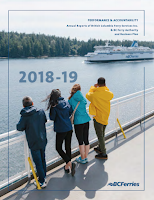 The organizations that make for Ferry Transportation in the province will be sharing the same stage in Vancouver next month, as both the BC Ferry Authority and BC Ferries host the public session at the Pan Pacific Hotel at 10 AM on Thursday August 15.

As part of the mid August gathering, the Chairs of Both Boards will make presentations, while the President and CEO of BC Ferries will review the pas year, as well as provide an outlook for the future.

As well, the Chief Financial Officer for BC Ferries will review the financial performance of the transportation service that hosts multiple routes along the British Columbia coast.

The annual gatherings rarely stray far from the lower mainland, which does seem to limit the opportunity for participation and the chance to ask questions of the two bodies from the residents of the North Coast and Haida Gwaii.

That's a theme that the MLA for the North Coast may want to take up with the two organizations, seeking to provide for some form of a public update opportunity for the North when it comes to the Ferry service to this region.

There are many residents, both on the North Coast and Haida Gwaii that would no doubt have a number of topics to raise with both the Ferry Authority members and BC Ferries officials, if only they have a venue and a meeting to attend in a more convenient geographical location.

For more items of note about Ferry Transportation to the region see our archive page here.
Posted by . at 11:53 AM

Email ThisBlogThis!Share to TwitterShare to FacebookShare to Pinterest
Labels: Annual meetings for BC Ferries and BC Ferry Authority set for August