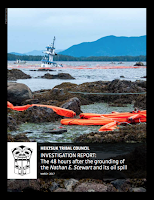 A scathing report into the sinking of the Nathan E. Stewart commissioned by the Heiltsuk First Nation has delivered some strong commentary towards the handling of the October incident by federal officials and how the follow up engagement with officials has highlighted many shortcomings in the federal government's approach to relations with First Nations.

The release of the report from the First Nation on the Central Coast, however finds North Coast MLA Jennifer Rice directing some of her commentary to the issue in a different direction.

While Ms. Rice does take note of some of her concerns when it comes to the Federal response, she is also putting much of her focus on how British Columbia Premier Christy Clark handled the aftermath of events.

The release on Thursday by the Heiltsuk of the seventy five page report and accompanying 71 pages of documentation, photos and background items, explores a number of themes related to the sinking of the tug and barge in Seaforth Channel on October 13th of last year.

It was an incident which deposited 110,000 litres of diesel into surrounding waters and has seen some of the marine resources of the sound remain off limits for the First Nation that harvests marine food sources in the region.

The report, described by the Heiltsuk as an exercise in sovereignty, was taken on to find out what happened in their waters last October and is the first step in a process to determine if there has been a breach in their traditional law.

As part of that process a six person adjudication Committee has been tasked to make that determination and will provide written reasons regarding whether that breach in traditional law occurred.

Included in the review is a comprehensive look at the tug itself and the response to the oil spill that followed the sinking, areas of study that make for the main focus for the first thirty pages.

The remainder of the publication offers a timeline of the events and a large volume of interviews with those from the Heiltsuk Nation that attended to the scene, or have been impacted by the incident.

Among some of the key observations from the report include concerns over a lack of spill response materials available for use in a timely manner, ineffective equipment and unexplained delays in deploying them as requested by the First Nation's officials.

The Heiltsuk also note that obtaining important information related to events prior to and during the incident has been a challenge,  Chapter three of the report provides a chart that lists some of the information that they had requested from various authorities.

As part of the documentation, they take note as to whether they had success in accessing that information, or if authorities failed to deliver the requested items.

The Heiltsuk also have observed how the Federal government emergency response system failed and how the government still does not honour its past commitments towards joint management over resources and marine protection.

The Heiltsuk also have a short video presentation (view here) that takes the viewer to the scene of the incident shortly after the First Nation began its work on trying to address the oil spill concerns.

For her part, the North Coast MLA echoed many of the concerns listed in the report issuing her own statement on Thursday that expressed her dissatisfaction with how the incident was handled by Kirby Offshore marine, the company that owned the tug.

Ms Rice also has strong words for both the provincial and federal governments, noting her first thoughts as she had arrived in Bella Bella to help the Heiltsuk in their efforts following report of the sinking, recounting her impression of how the response by the federal and provincial authorities was anything but "world class"

“I was appalled at the responses from the federal and provincial governments to this oil spill. As soon as I heard about the spill I was on my way out to do my part to help the Heiltsuk Nation. What I saw was not a world-class response to an oil spill; what I saw was chaos where the governments of Canada and British Columbia were ill-prepared to respond to a spill like this in a location as remote as the central coast”

She was even more sharp in her assessment of blame through her Facebook portal, providing a number of thoughts on how Premier Christy Clark turned her back on the Heiltsuk

The Heiltsuk Report won't be the only documentation to be released related to the October marine incident off of Bella Bella.

Still to come is a report from the Transportation Safety Board, that organization is currently conducting its own investigation into the 2016 marine incident. Though where they are in their process is not known, as information related to that investigation has not been updated since January.

No release date has been indicated to this point as to when that report will be made public.