The much anticipated reveal of the what the McKay Street Park Project may look like will take place later this month, with the Grand Design unveiling to take place in the Main Atrium at Northwest Community College on Tuesday, April 25th from 7 to 9 PM.

The project is being planned by Transition Prince Rupert and the McKay Street Park Steering Committee and has benefited from the assistance of Portland, Oregon's City Repair Project.

That organization made use of the feedback from Prince Rupert of the fall to develop what will be the blue print for the project moving forward.

A number of local businesses have also participated in the first phase of the project design process, including the local organization Redesign Rupert.

Mayor Brain highlighted the upcoming public event through his Facebook page, noting that the Design Unveiling is only the first phase of the project, following that will be a community fundraising process, the success of which will determine how quickly the project may get off the ground. With Mr. Brain noting that he is hopeful of a piece by piece approach for the Park to take place over the next year or two. 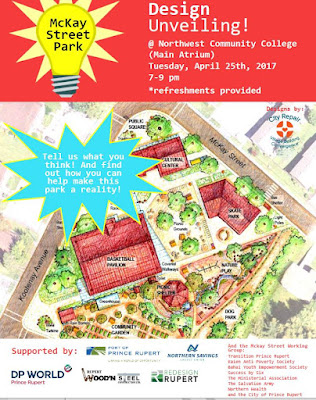 The proposed re-purposing of the old Kootenay Ball Field into what would be a west side urban oasis has not made for much in the way of conversation at Prince Rupert City Council sessions, with little background provided as to how the City plans to turn over a significant amount of land to a community organization and what that might mean for ongoing maintenance and other issues.

Not known to this point is what role, outside of turning over the land to the group, that the City may have to play in the new public space and if there will be any additional costs for the city to prepare the site for the ambitious plans.

More on the timeline for development and what those fundraising plans might be moving forward will be outlined as part of the Grand Design reveal at the April 25th meeting at NWCC.

Updates on the April 25th reveal can be found on the Transition Prince Rupert Facebook page.

Some of the background to the proposed redevelopment of the field can be reviewed below:

More notes on City Council Discussions can be found on our Council Archive page.