Students and teachers from Charles Hays Secondary, along with their chaperones are about to experience a once in a lifetime experience, as they prepare to take part in this weekend's commemoration of the 100th anniversary of the Battle of Vimy Ridge.

The First World War battle for the ridge, which came with significant loss of Canadian life, has become one of the most defining moments of Canadian history and this year being the commemoration of its centennial, there has been a special focus put on the events to take place in France.

For the Charles Hays students, the trip to Europe offers up a  history lesson like none other, with the group able to explore many of the locations that have forged much of Canada's early history.

However the real focus of the trip and the memories that they will most likely bring back with them, will come on Sunday when the Charles Hays students follow the same pathways as those who fought and died in a key battle of World War One. The students retracing the very same terrain that the Canadians had been tasked to capture, looking to claim a ridge that many said would never be taken.

Something that won't be lost on the young Prince Rupert ambassadors will be the ages of those stone markers in the cemeteries that they will be exploring as part of their trip. Many of those buried in the fields of France were not that much older than the Charles Hays students that will be paying their respects this week.

The journey for the Prince Rupert group began on Sunday when they departed from the North Coast for their connecting flight out of Vancouver, since that time they have spent their first few days in Europe in London, taking in many of the sights to be seen in the UK capital.

Yesterday the Charles Hays students and many others from across Canada, participated in the first of the Vimy remembrances planned for this week, attending a ceremony in London's Green Park, located near Buckingham Palace.

Travelling with EF Tours, the group is on the move through France and Belgium now, keeping a fast pace to tour local sights while making their way to the Vimy Memorial for Sunday's commemoration.

That event will include a large volume of Canadians, including similar school groups such as theirs who have travelled to be part of the remembrance. It's anticipated that over 50,000 people will be participating in the commemoration ceremony when they gather under the twin spires of the Vimy memorial on Sunday.

Included in those heading overseas will be Prime Minister Justin Trudeau who will be participating in the official ceremonies along with the Governor General, a number of other Canadian political officials, Canadian military representatives and members of the Royal family.

The Vimy 100 commemoration will be broadcast live from France on the main Canadian television networks, as well as the cable news channels this Sunday morning.

The Vimy 100 broadcast is scheduled to start at 6AM Pacific time.

The event will also be available for live streaming through cbcnews.ca

As you view the proceedings, keep a watchful eye for a large group in red ponchos. Somewhere in that collection of Canadian youth will be the travellers from the North Coast, exploring history in the most memorable way, living it from the footsteps of those that fought and died on those fields of France.

The trip to France is not the first time that Charles Hays students and staff have paid their respects to the iconic Canadian memorial at Vimy.

Five years ago the school sent a delegation to the 95th anniversary commemoration event, a trip that provided a new perspective on the world and Canadian history for students at the time.

As part of that journey to France, a number of essays from Charles Hays students on the theme of  Vimy Ridge were included in the book From the West Coast to the Western Front.

The collection of stories of the war was put together by former CBC radio host Mark Forsythe and author Greg Dickson.

The Charles Hays Secondary School Twitter feed has been relaying many photos of the journey so far (such as the ones included above which CHSS has allowed us to repost).

The images from the trip come courtesy of teacher Raegan Sawka who is part of the 2017 tour of Europe.

You can follow the group as they make their way along on their European journey here. 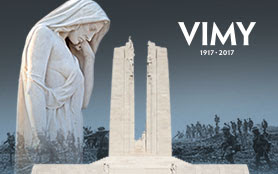 The focus on Vimy Ridge is being documented through a range of material that has been created this week. You can take the walk back to 100 years ago, from some of the items we've highlighted below.

Some of the news coverage of the Vimy 100 commemoration

Remembering Vimy 100 years later
"It helps us remember our roots': Edmonton cadets head to Vimy memorial for centenary of historic battle
Why Vimy matters: Peter Mansbridge on a battle that defined us
The oaks of Vimy: One man's mission to restore a natural treasure to the battlefield
'Giving the stories to the youth'" Young Canadians share story of Vimy on social media
Two communities unite over 100-year old Vimy Ridge bond
Hill 70 and Vimy, 100 years later
'Forward they moved into a storm of steel:' New Vimy exhibit marks centenary
Vimy at 100: A town that gave too much, a battalion that fought too hard, and a nation that lost too many sons
Vimy Ridge centennial will be 'something special': A defining moment in Canadian history
The shadow of Vimy Ridge
A century later, remembering the hard win at Vimy Ridge
The event that recast the Battle of Vimy Ridge
Thousands of students making pilgrimage to Vimy
Fog of war and time cloud Vimy's original message
The forgotten man behind the unforgettable Vimy memorial
The Germans considered it a victory too: Rare images showing everything you didn't know about Vimy Ridge
In the footsteps of war: Five key sites for a Canadian pilgrimage to France and Belgium
Meet the grave hunters: British retirees battle overgrown cemeteries to find long-lost Canadian war dead
Vimy Ridge: Birthplace of a nation - or of a Canadian myth?
The forgotten WW1 battle that helped define Canada as a nation
Students are bringing First World War soldier's stories to life
A century later, what should the battle of Vimy Ridge mean for Canada?


More notes related to Education in the Northwest can be found on our archive page.
Posted by . at 11:33 AM