This weeks announcement of the signing of a letter of intent between Pembina pipeline and the Prince Rupert Legacy Corporation, made for a topic that ebbed and flowed through much of the Special City Council Session on Tuesday.

The proposed project which would see the Alberta energy company explore the prospect of developing a propane export terminal at Watson Island, had council members looking forward to a day where they may finally gain some revenue from the long idle Watson Island site.

It was a bit of looking to the future which made for a good part of the background commentary on Budget issues for a number of City councillors, as well as Mayor Brain as the council session moved through its 39 minutes.

The recurring theme of the Council members commentary was one of hope that the early stages of investigation of the site will one day lead to the first anchor industry for the industrial site on the outskirts of town and offer up the prospect of a bit of financial breathing room for future budget deliberations.

Such was the interest in the topic that as the final moments of Tuesday's Council session were winding down, Mayor Brain expanded on the news, providing a short overview of the proposed project and Legacy Corporation's engagement with Pembina.

The Mayor's commentary starts at the 36 minute mark.

Mayor Brain also directed those city residents looking for more information to head for the city's website. Where the city's press release from Tuesday provided a few more details from the City of Prince Rupert's perspective on events.

The Mayor was also engaged on the topic through his Facebook page this week, making note of an exclusive story that the City had provided to the weekly newspaper on Monday to share word of the latest notes from Watson Island. 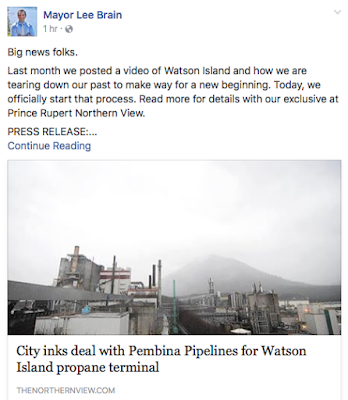 Through his Facebook portal,  Mayor Brain celebrated the announcement and also provided both the City's media release and his own notes on the events of the week.

“We are looking forward to a new beginning for our community as we work towards putting Watson Island back on the tax roll,” said Mayor Lee Brain. “Pembina is a Canadian company with a proven track record for supporting the communities in which they operate and has an industry-leading history of operating safely. We are happy to have the opportunity to potentially partner with them to create new local jobs and revenue that will significantly improve the quality of life for everyone in Prince Rupert.”

And while the prospect of some development on Watson Island is certainly welcome news for the community, the early excitement of the announcement should be balanced with the need for more detailed background as to what it such a project could mean for the North Coast.

For the most part, once you give a first review of the talking points from this week, the impression is that we're still a fair bit away from any Final Investment Decision or revenue delivery to city coffers.

From the city's media release, no details were offered up as to how much the City might receive when it comes to the Pembina interest in the Watson site, or what benefits that the City might be seeking from the Alberta company.

As well, while the prospect of jobs for the community was noted, there was no indication as to how many jobs might be created both during the construction and operational phases for the development.

Also not included in the overview was any kind of an update related to the past legal concerns from the Watson site.

On that theme, a Vancouver Coal company, Colonial Coal still apparently has some ambitions for the Watson Island site, holding to them as recently as January of this year, making note of their interest as part of their Financial statement information flow.

Even today, Colonial Coal continues to highlight Watson Island as one of its listed projects on their corporate site.

Through much of the Watson Island process, the City has been fairly quiet when it comes to providing any comments on the Colonial challenge to the site and what impact it may have on any future plans for development by the City.

Beyond those notes, there should also be some interest in what level of active oversight that the City may, or may not engage in when it comes to the proposed Pembina development.

As we've seen in the past, the City of Prince Rupert has been very active in sharing their thoughts when it comes to the major industrial projects in the region, including the Pacific NorthWest LNG project and the Aurora proposal for Digby Island.

Not to mention the rather strenuous review that Council has provided for many of the proposed residential developments for the city, the most recent example of which was the long and winding path for the now abandoned development plan for the Kanata school lands.

Residents of the  city will be looking to see if what has been a very motivated City Council when it comes to developments in other jurisdictions, allocates that same kind of focus and involvement for a proposed investment on Watson Island.

Beyond providing a bit more background on those percolating Pembina plans, the City also appears to have some fence mending to do with the neighbours, with the Northern View making note that the District of Port Edward had been left out of the information flow when it comes to what would actually be their new potential neighbours.

That was a consultative mis-step by the City of Prince Rupert, especially when one considers that it will be the residents of Port Edward that will have to deal with what would be a fairly significant volume of propane cars rolling through their community on their way towards the Watson Island terminal location.

That oversight in not giving the District a heads up, is something that doesn't exactly make for good regional relations, particularly as the City of Prince Rupert prepares to try and gain some kind of reduction in their Ridley Island Tax revenue sharing situation with the District, an issue that the Mayor made note of on Tuesday evening.

The Pembina announcement was made public in the same week that the City was reviewing its final thoughts on the proposed mill rate increase for 2017, and the visions of future revenue from the Watson site seemed to dominate much of the discussion on this years budget needs.

At times on Tuesday, the Council members almost took on a wishful approach to the Watson terminal plan, with may opinions shared that they hope that it could be a development that may finally change the way that Council will have to approach future budget decision making.

Taxpayers will be the first to offer up their salute to the Mayor and City Council should the albatross that has been Watson Island finally be removed from the Prince Rupert narrative.

However, until Pembina actually delivers some blue prints as to what the terminal will look like and ships out that first ocean vessel full of LPG, most of us will  be watching the social media streams awaiting further updates and a lot more information.

A look at the remainder of Tuesday's City Council session can be found on our Council Timeline feature here.

The Pembina story to this point can be reviewed from our LPG archives here.

While some background on the long running Watson Island story see our archive page here.