From the Port to the Court! New Supreme Court of BC Justice announced for Prince Rupert 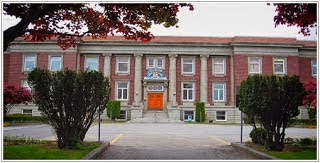 The journey to the office won't take Andrew Mayer into the Cow Bay district anymore, instead he'll be charting his daily course towards the Prince Rupert Court House, destined to dispense justice as the newest Supreme Court of British Columbia Justice in the community.

As part of a number announcements Wednesday from Jody Wilson-Raybould, the Federal Justice Minister, Mr. Mayer became Justice Mayer, with an appointed to the bench by the Federal Government.

The new Federal Court Justice will remain in Prince Rupert, he will be replacing Mr. Justice R.T.C. Johnson, who elected to become a supernumerary judge last December.

Justice Mayer, is well known in Prince Rupert through his work with the Prince Rupert Port Authority, serving as the General Counsel and Vice-President of Commercial and Regulatory Affairs.

He had been with the Port Authority since 2008 and has been prominent as part of the Port's Corporate leadership as the Port expanded its presence along the Prince Rupert waterfront.

As part of the lengthy overview of his CV, the Federal Justice Ministry made note of his work in the areas of  complex, multi-party corporate-commercial negotiations, regulatory  matters and consultation with First Nations.

Previous to his work with the Port Authority, Justice Mayer practiced law in Vancouver, he has appeared before all levels of court in British Columbia and the Federal Court of Canada.

In a media release issued by the Port of Prince Rupert, CEO and President Don Krusel noted the impact that Justice Mayer had on the local port and celebrated his appointment to the Supreme Court of B.C. bench.

“Andrew’s collaborative spirit, work ethic and equanimity have been vital to the growth of the Port of Prince Rupert,” ... “His embodiment of integrity and legal expertise enabled the port to reach historic agreements and to reinforce key relationships. These virtues also make Andrew ideally suited to his new role, and I extend congratulations on behalf of our Board, staff and myself upon his appointment to the BC Supreme Court."

The appointment of Justice Mayer which is effective immediately, was made as part of a new process for review of judicial applications, put in place in October of 2016. The new approach to selection for the judiciary emphasizes transparency, merit and diversity. It is designed to ensure the appointment of jurists who meet the highest standards of excellence and integrity.

The Government of Canada announcement and biography for the new Justice can be reviewed here.
Posted by . at 8:35 AM

Email ThisBlogThis!Share to TwitterShare to FacebookShare to Pinterest
Labels: New Supreme Court of BC Justice announced