A cavalcade of Christy! Premier Clark in the Northwest


The provincial election campaign ramped up just a little bit more on Thursday, as Premier Christy Clark rolled on down the highway into Prince Rupert, with the highway cruiser making its final stop of a three city tour in the city's Cow Bay District.

Once the wheels on the bus were no longer going round and round the Premier disembarked to greet Liberal candidate Herb Pond, shake hands with the crowd, rub a few belly or two as things turned out and to take her hand at learning the coffee making ropes from Judson Rowse at Cowpuccino's.

Ms. Clark was in town to lend a hand to the Liberal candidate 's campaign through the Cowpuccino's meet and greet, an indication that the BC Liberals are looking to shake up the local and provincial political scene by capturing the North Coast riding from Jennifer Rice and the NDP on May 9th.

The Northwest journey took the Premier to Kitimat and Terrace earlier in the day to meet with voters along with Skeena candidate Ellis Ross. The tour also included some of the provincial media, following along on the one day whistle stop tour of the region.

The images of the trek were quickly launched into the world of twitter, as the Vancouver Sun's Rob Shaw, The Globe's Justine Hunter, CBC's Jesse Johnston and even Premier Clark herself shared some snapshots of the Rupert leg of the day.  A sample of which can be reviewed below:

And had this been a political thriller movie, we now reach the point where the music builds a bit, as the camera zooms in on the name of the boat as it sailed off into the sunset ... 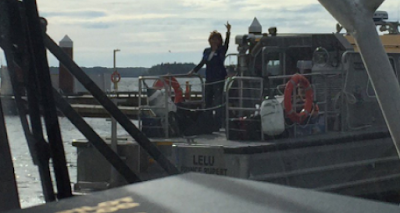 And Fade Out and Scene!

More notes on the North Coast election campaign can be found on our North Coast Votes page.

While we also  have a larger overview of the provincial campaign which can be reviewed on our political portal D'Arcy McGee
Posted by . at 9:54 AM

Email ThisBlogThis!Share to TwitterShare to FacebookShare to Pinterest
Labels: Cavalcade of christy, Premier Clark in the NW