The makings of a media migration on the North Coast?

Spring time means a new start, and if a couple of recent advertisements in the region's weekly newspaper are an indication, we may soon have to make a line up change in the starting line up for the Northern View.

Just two short weeks after they celebrated the promotion of Shannon Lough to the position of editor, the weekly paper is now  looking to give her some new talent to work with.

With the Northern View now putting out the Help Wanted sign, not once, but twice; as they look to fill available positions with the paper and web portal.

The weekend edition of the Northern Connector outlined the scope of two positions that are now listed at the Northern View.  With the local paper currently seeking applications for a News Reporter, as well as someone to take on the duties in the Sports Department.

Aspiring sportswriters in the region will be a little behind on the competition for the job at the local paper, the Northern View has been advertising the Sports position through the media trade listings since March 29th, you can review some of the requirements for the job here.

Some background related to the News reporter job which was posted over the weekend, can be reviewed here. The successful candidate for that position will be expected to provide content for not only the Northern View, but the Northern, Connector, N2K and North Coast Outdoors.

No salary information was included as part of the two job opportunities.

The two advertisements are also available from the Northern Connector, either in print, or online.

From the qualifications notes, a  significant emphasis is put on the skills required to be computer and social media savvy, something which seems to be one of the key elements for any aspiring reporter with the paper. 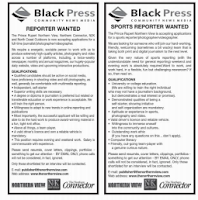 Along with the focus on the need to keep up to speed with online developments, the ability to recognize good stories and develop them into compelling content as well as to be able to work in a web-first mentality is also of some focus when it comes to the two job opportunities.

The Deadline to join Publisher Todd Hamilton's team of news hounds at the weekly paper is May 15th.

While the job openings might suggest the hint of an expanding news team for the North Coast, the more likely scenario is that we may soon begin to see the farewell notes from those that may be departing from the Northern View over the next few days.

More notes on the North Coast media scene can be found on our archive page here.
Posted by . at 12:53 PM

Email ThisBlogThis!Share to TwitterShare to FacebookShare to Pinterest
Labels: Job ops at the Northern View