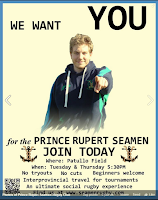 The test of a new season beckons for the Prince Rupert Seamen Rugby squad as they make plans for a Saturday showdown with Terrace, as they head down the highway for a 3PM match up with the Northmen.

This weekends first hit of the season, marks a return to competitive rugby for 2017 and an ambitious schedule of travel ahead as they return to the regular rotation of Northern BC rugby events as part of the Central Interior Rugby Union.

Next month the team makes the journey to Prince George, ready to do battle in what should be a high profile test for the 2017 season.

The Rupert team's return to the Northern collective is being welcomed in Prince George, where anticipation for the May 6th opener is already starting to ramp up.

Other events along the way this year include match ups with Williams Lake and more battles with Terrace, with the Rupert squad to host their own home dates through the six game schedule.

For the month of April, the Seamen have been working out at the all weather turf at Charles Hays Secondary, with practice sessions taking place Tuesday and Thursdays at 5 PM, with Sunday Scrums set for 3PM.

Once the weather improves and the field is ready, the team will shift over to their more familiar home of the natural turf surface at Prince Rupert Middle School.

Always on the look out for new talent, you can check out a practice session to see if Rugby is where you might find your sporting groove, or at least an opportunity to get involved in the growing Prince Rupert sports scene.

You can find out more about the team and their plans for 2017 from Prince Rupert Seamen Facebook Page.

As the season moves forward we will track some of the notes from the Seamen camp from our archive page here.
Posted by . at 10:30 AM