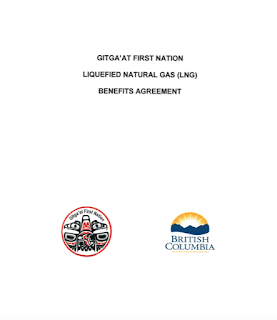 Add the Gitga'at Nation to the growing list of negotiated agreements on LNG, with the Hartley Bay based First Nation reaching an agreement late last month on a range of terms related to LNG development.

The Gitga'at arrangement comes as a result of discussions that previously had led to the Province entering into the Coastal First Nations Liquefied Benefits Agreement of January 19, 2016 which was reached with the Great Bear Initiative Society, of which Gitga'at is a member

The financials of the agreement will see the Province of British Columbia provide Gitga'at with Initial Base Funding in the Amount of  $1,500,000 payable on a schedule that will see $500,000 paid within 60 days of an effective date.

Two further payments of $500,000 will be provided within 60 days of the first and second anniversaries of the Effective Date.

The agreement also features explanations as to payments should no investment decision be announced by March 31st of 2019, as well as the parameters for Ongoing Base Funding, Incremental Project Funding, as well as In Service payments and LNG Expansion payments.

There are also a number of factors listed that could lead to the suspension of the agreement, with terms covering a range of exceptions should a project not move forward following the announcement of FID date, there are also two key elements related to any moves that may hinder the progress of any LNG  project.

In Section Three of the agreement, the Province notes that it may suspend providing funding to Gitga'at if:

Gitga'at initiates any legal action that challenges, directly or indirectly, any LNG Project, it's associated infrastructure of any Government Action; or

Gitga'at supports or participates in any act that frustrates, delays, stops or otherwise physically impedes the right of the Province or an LNG Project proponent, or any of their respective employees, contractors, agents, representative, or invitees to gain access to any part of an LNG project or its Associated Infrastructure to carry out activities associated with that LNG project.

With a significant portion of the Gitgat people living in Prince Rupert, part of the agreement will include $500,000 to find a location for a long term permanent office in the area, with the use described as to provide a space for meetings and training sessions should an LNG project move into the development stage.

The agreement that has been negotiated will be in place for a number of proposed LNG developments that have been mentioned for the North Coast over the last few years. 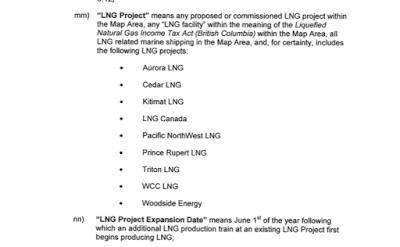 The province offered its support towards the Gitga'at developing and operating a Marine Emergency Response and Research Facility near Hartley Bay.

The Facility would provide a home and operating base for search and rescue, marine vessel casualty and cargo spill  and loss first response activities

As well the centre would provide a platform for a wold class research and teaching facility, and provide an economic development opportunity for Gitga'at members living in Hartley Bay. Included would be training and employment opportunities related to communications, search and rescue and marine emergency response and environmental research and monitoring

The Province and Gitga'at will establish air quality standards and hold meetings to discuss those standards and work to resolve any issues identified by Gitga'at in respect to those proposed standards.

Should the province establish any air quality management boards or working groups, the Province will provide the Gitga'at the opportunity to take part in the development and activities of the board or working group.

Among the other notes related to Air monitoring, the province will provide one time funding of $50,000 to the Gitga'at within 30 days of the Effective Date to support the development of an air quality monitoring network.

As part of the arrangement, the Gitga'at will also have to provide an annual report to the Province; among the elements that will make up that report will be an explanation as to how they are using the funding and how any expenditures are consistent with the terms of the agreement.

Land Transfers also make for an important aspect of the agreement, with land located at Gil Island and what are known as Hartley Bay Lands to be transferred to the Gitga'at Nation. 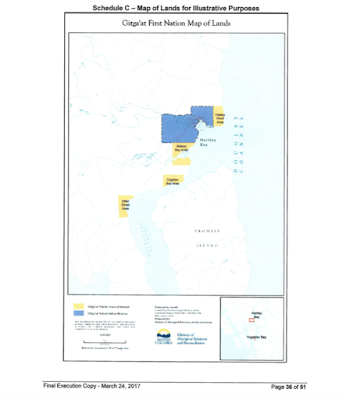 One segment of the document explores how the Gitga'at may be able to develop a micro-hydro power development for the community of Hartley Bay. That is an area that has long been an interest of the First Nation and could serve to address some of its current energy issues.

The agreement which was signed on March 29th, is easily accessed through the public online section of the B.C. government website dedicated to Aboriginal relations, the LNG Benefits agreement can be reviewed here.

More notes related to the Gitga'at Nation and the range of other negotiations that they have had with the Provincial government can be found here.

Other First Nations on the North Coast that have recently concluded agreements with the province include both Metlakatla and Lax Kw'alaams, with both receiving a range of benefits and/or land transfers to go along with their support for the prospect of LNG development in the region.

A complete archive of all of the agreements in place between the Province and First Nations to this point available for review here.

For more background on the Pacific NorthWest LNG project and other proposed developments in the region see our archive page here.
Posted by . at 8:48 AM

Email ThisBlogThis!Share to TwitterShare to FacebookShare to Pinterest
Labels: Gitgaat Agreement with BC