Skeena candidates not shy at meeting the public at political forums 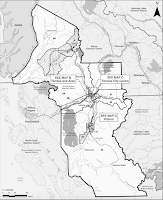 Even before the writ was dropped for the Provincial election on Tuesday, our neighbours to the east had already been able to measure the political themes for their campaign, as both Liberal Ellis Ross and NDP candidate Bruce Bidgood had already taken in their first All Candidates forum.

With former MLA Robin Austin now in political retirement, the Skeena seat is making for one of the more hotly contested of riding's, as the two main parties look to stake a claim in the Northwest, with the Liberals no doubt hoping that Mr. Ross's high profile will help swing Skeena from Orange to liberal red and Blue.

The first public forum took place April 5th and was hosted by the BC council for International Cooperation, which offered up themes on sustainability for the would be MLA's to discuss, an opportunity for the two candidates to get the pulse of the community on those issues.

The next all candidates forum for the Skeena riding is set for Tuesday, April 18th in Terrace at the REM Lee Theatre starting at 7 PM.

Kitimat residents will also have an opportunity to hear more on the issues at a forum to be held Thursday, April 20th at 7PM the Mount Elizabeth Theatre.

As we noted on the blog yesterday, for Prince Rupert/Port Edward and neighbouring communities, the only All Candidates scheduled for here to this point is set for Monday, April 24th at the Lester Centre.

Email ThisBlogThis!Share to TwitterShare to FacebookShare to Pinterest
Labels: All Candidates forums in NW