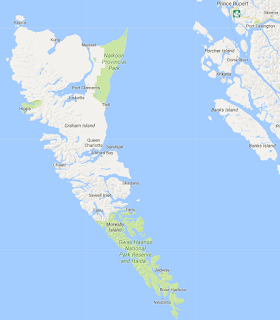 It's not often that we get to issue a Traffic Alert for Haida Gwaii, but election season brings out the travellers and this week the course was westbound out of Prince Rupert!

From Skidegate to Masset and all points in between, the word was out!  "Be aware, politicians are in your area", where residents most likely could expect delays should they have made a stop in your community.

If residents of Haida Gwaii weren't aware that the provincial election campaign was about to go into high hear, they probably are by now, with the Island suddenly the  main attraction this week for two thirds of the declared candidates that are looking for votes in the May election.

We don't know if they crossed paths over the last few days, but both BC Liberal candidate Herb Pond and NDP MLA Jennifer Rice have been travelling the roads and waters of the Islands, putting some focus on issues on Haida Gwaii and stopping in at a number of locations to hear of the concerns and answer questions from residents and community officials.

Mr. Pond has been quite active through his Facebook page, chronicling his journey to the Islands which covered two days.

Arriving on Sunday, Mr. Pond managed to fit a fair number of events into his schedule meeting with the Masset Village Council, as well as sitting in with residents at a number of businesses and venues around the area to hear some of their thoughts on issues of concern to them.

Ms. Rice for her part has also been shouting out some notes through her Facebook page as well.

The NDP incumbent was giving her followers a look at some of her events over the last few days on Haida Gwaii.  Ms. Rice arrived on the Islands early Monday morning and since that time she has met with the council at Queen Charlotte City, while also speaking to residents of Skidegate on Tuesday.

Today's agenda has her visiting the Sandspit area.

For those looking for a larger overview of the Provincial campaign can find a collection of notes from our Darcy McGee political portal.

Email ThisBlogThis!Share to TwitterShare to FacebookShare to Pinterest
Labels: Rice and Pond head to haida gwaii