Riding the rails to the Cassiar Cannery


Granted the project is probably more for those travelling a distance that is a little farther away than the trek from Prince Rupert's Fairview VIA station to just past the Port Edward town site.

But, from wherever you plan to board the VIA Rail run known as the Skeena, it does make a stop at the Cassiar Cannery and that fact is making for a bit of buzz on Social media for those looking to make a memorable trip to the North Coast.

The opportunity to ride the rails to Port Edward was featured over the weekend through the Destination BC tourism twitter feed, which notes that a stop can be arranged with VIA for those that are making the Cassiar Cannery part of their vacation plans.

The notification perhaps more of interest for those looking to make a trip to the North Coast a bit of an adventure, taking in the captivating scenery found along the Skeena run as it travels through the Rockies out of Jasper on its way to Prince Rupert. 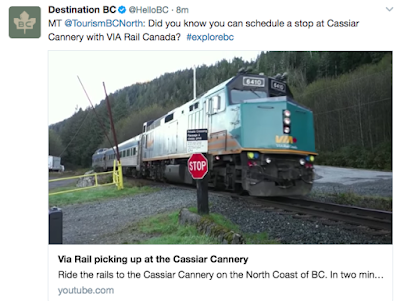 The Cassiar Cannery site, is quickly building up a reputation as a spectacular setting for a getway in the region. With the owners having transformed the onetime fish cannery into yet another unique North Coast attraction, featuring a number of Rooms for retreats and vacation planning.

You can learn more about what they have to offer for visitors see their website and Facebook page.

More notes on tourism in the Northwest can be found on our archive pages.

Email ThisBlogThis!Share to TwitterShare to FacebookShare to Pinterest
Labels: VIA Rail stops at Cassiar Cannery