A few details of the new service have just been added to the Misty Fjord website, which notes that flights will be available on Monday, Wednesday and Friday from May 1st to September 30th.

The Ketchikan based airline is highlighting the new era of trade, leisure and economic opportunities that their service will offer both communities. As well as the additional access that it will offer for more shopping, cultural and sporting events that could come to access to international airports from the two starting points.

The service would link Prince Rupert's Seal Cove airbase in the City's east end with downtown Ketchikan as part of a forty five minute flight. 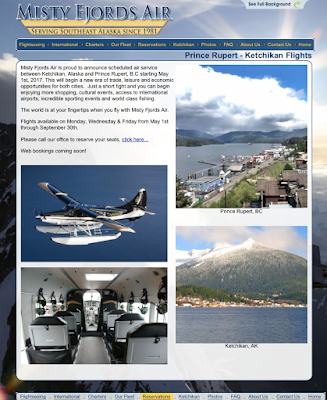 Misty Fjords is best known for offering flight seeing trips in the Ketchikan area, a popular option for the many cruise ship passengers that call on the Southeast Alaska city during the busy summer Alaska cruise season.

You can learn more about their service and the plans to connect the two communities here.

Mayor Lee Brain made note of the new service on his Facebook page calling attention to what he has described as a sacred connection to the Alaska city.

The introduction of international service between the two communities will also have the need for Customs services at both ends of the journey, the details of how that may work perhaps to be explained at today's information session for the Chamber of Commerce audience.

Mayor Brain will be making the introductions to the Chamber gathering today, with the Mayor Lew Williams of Ketchikan and Misty Fjord officials in the city to provide more notes on the pending launch.

It's not the first time that additional connections between Prince Rupert and Ketchikan have been considered, an airline service was once in place in the late 1990's, but was suspended as that decade came to an end.

In September of 2015, Prince Rupert's West Coast Launch had outlined the prospect of hosting a marine service between the two communities, that service would have also operated during the summer season, however to this point those plans have not moved much beyond the investigative phase.

The two communities currently are serviced by Alaska Marine Highway Service with a ferry connection between Prince Rupert and Ketchikan departing from the Fairview Terminal.

You can find more background on connections with Ketchikan from our Transportation archives here.

Email ThisBlogThis!Share to TwitterShare to FacebookShare to Pinterest
Labels: Ketchikan airline to launch three time a week summer service to and from Prince Rupert