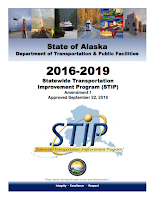 The state of Alaska recently rolled out their ambitious Transportation plan for 2017 to 2019 and for those in Prince Rupert looking for some momentum on the renovation plans for the Alaska Marine Terminal in the city, the document is going to be a bit of a disappointment.

There is no mention of any work ahead for the Prince Rupert Terminal location in the latest documentation from the State of Alaska, though our neighbours to the north in Ketchikan will see some improvements in place as part of the 2016-19 Statewide Transportation Improvement Program.

The Alaska side project will see work take place to address structural and operation deficiencies at the Ketchikan AMHS terminal. With replacement and refurbishment of existing mooring and berthing structures se to get underway.

The terminal in Alaska's First City will also see a new mooring dolphin structure in place as well as to construct upland access to go along with terminal building improvements. 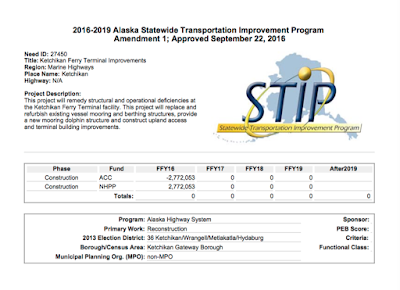 The Ketchikan area is also going to see some significant road work taking place in the summer season with the Southeast community included in a dozen projects that are outlined as part part of the Transportation plan for the immediate area, with a number of other projects planned for surrounding communities near Ketchikan.

You can review the full Statewide Marine Highway Systems projects to 2019 from this link to the Alaska government site.

The last update that the City of Prince Rupert offered up on the renovation plans for the Fairivew Terminal was in October  of last year.

At that time Mayor Lee Brain observed that the Alaskans had reinforced their desire to continue to use Prince Rupert as a departure and arrival point for the service.

So far however, there does not appear to be much in the way of renovations, whether temporary or permanent taking place at Fairview Bay facility.


The issue also seems to have fallen off the political radar at the Federal and provincial level as well, with few comments heard in recent months on the topic from Skeena NDP MP Nathan Cullen, nor does the link to Alaska seem to have made for much in the way of a local issue for the candidates in the current election campaign on the North Coast.

Things with the US government may get complicate even further in the weeks ahead, with word that President Donald Trump is looking to expand the Buy America concept for the US government, adding Hire America to what is expected to be an upcoming executive order.

Email ThisBlogThis!Share to TwitterShare to FacebookShare to Pinterest
Labels: AMHS Transportation plan 2016 to 2019