Roll call for the fallen Rupertites of Vimy Ridge 1917


Last Sunday Canadians commemorated the Battle of Vimy Ridge, with events taking place in many communities across Canada and in France, the latter attended by a group of local students as we made note of on the blog in the days leading up to April 9th.

During the course of last week, two items in the Northern View caught our attention, one a letter to the editor from local resident Glenn Boychuck, who along with taking Prince Rupert City Council to task for not organizing a North Coast commemoration ceremony, also provided a thumbnail sketch of the Northern British Columbian contingent that went into battle at Vimy.

The other item of some note this week was an editorial from the paper, which like Mr. Boychuck had some words to share on the lack of local observance, as well as to list the names of those that took to the battlefield in that pivotal moment of Canadian military history.

The two items along with the list of names that was provided also caught the attention of one of our regular readers.

And from those Vimy related notes, he took that information one step further, researching some of the documentation of their their service, then offering the North Coast Review the background material to share with the readers of the blog.

The links listed below came from the Canadian Expeditionary Force Listings, as well as the Commonwealth War Graves Commission information site.

Our thanks to our guest contributor, who prefers to remain in the background of his work.

His efforts were impressive and the opportunity to share them with those that check in on the blog is one that we welcome.


The names of the Prince Rupert fallen include:


One of the many things of interest from the documentation is that while they had some form of connection with Prince Rupert as their base for disembarkation for Europe, they came from a wide range of original locations.

Six of the seven were born in a number of communities in the UK; from Belfast, Edinburgh, Manchester, Scarboro, London and Bath in England. With one American transplant serving King and Country from Washington State.

The majority served in the Canadian Expeditionary Force, listed among the ranks of a number of different Canadian units. One of the seven was tasked to the Royal Scots Regiment of the British Army.

In addition to the work of our contributing author, you can find more items of interest on World War One and all of Canada's military engagements from the Veteran's Affairs website.

Among some areas for Prince Rupert families or history buffs to explore are:

History of the First World War Book of Remembrance

The Battle of Vimy Ridge

On our political portal D'Arcy McGee we have archived some video notes from last Sunday's commemoration at Vimy, culled from the video archives of the CBC, they offer a glimpse of last weekend's events and some of the background leading up to Vimy100.

Should you find yourself travelling past the Prince Rupert Court House, take a moment to visit the Prince Rupert War Memorial. There you will have opportunity to review the names and consider the sacrifice of those who served, as well as pause to reflect on their call to duty in service of their nation. 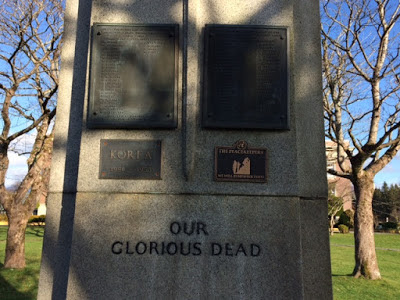 While Colonel John McRae's iconic Canadian Poem In Flanders Field was of another mark on the map of Europe, those words echo as loud for those that fell at Vimy Ridge.


In Flanders Fields the poppies blow
Between the Crosses Row on Row,
That mark our place; and in the sky
The larks, still bravely singing, fly

We are the Dead, Short days Ago
We Lived, Felt Dawn, saw sunset glow
Loved and were Loved, and now we lie
In Flanders Fields

Take up our quarrel with the foe
To  you from falling hands we throw
The torch; be yours to hold it high
If ye break faith with us who die
We Shall not sleep, though poppies grow
In Flanders Fields
Posted by . at 9:40 AM

Email ThisBlogThis!Share to TwitterShare to FacebookShare to Pinterest
Labels: Vimy 100