What is believed to have been a false positive on the status of Prince Rupert's water will seemingly go down as the cause of your six weeks of Boiling water over the Christmas and New Years period.

That finding the largest note of interest, from a number of takeaways of a report released on Friday afternoon by the City of Prince Rupert.

As, we outlined on Friday, the City after hearing from Northern Health posted the all clear on the city's water supply at mid-day last Friday, removing the Water Quality Advisory that had taken the place of the Boil Order Notice back in late January. 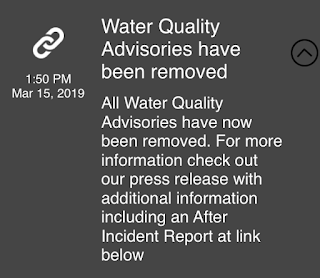 The lab error was not discovered by officials until the City made a change in where they were sending their test results, a decision which did not deliver revised more encouraging results until January and the eventual downgrade of the Boil Order to a Water Quality Advisory. 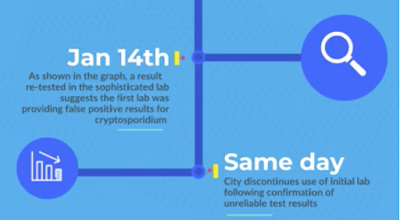 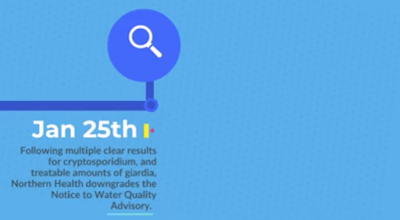 The timeline of the event was provided by way of a video feature posted to the City's Facebook page on Friday, which also explores more of the background to the testing process and the results that were received

What's not explored as part of the city's review of the situation,  is how long the city took before seeking a second opinion on the state of the water and why they didn't advise the public accordingly  at the time that the second lab results had differed significantly from the first, something that may have relieved some of the tension in the community stemming from the Boil Order.

A statement from the Mayor as part of Friday's release of information offers up an indication as to how the city was thinking towards the new information of January, though it would seem that it was a statement that should have probably been provided at that pivotal point in the water situation of  January, to provide for full transparency when it comes to what the city's residents should have known at the time.

“Although we now understand that there is reason to believe initial results for Cryptosporidium were false positives, we also know that putting the Boil Notice into effect was the best action to take from a public health perspective based on our understanding at the time,” ... “This incident has helped both us at the City and Northern Health better understand potential risk from protozoa, and has improved our standard for testing and monitoring water quality going ahead.”  --Mayor Lee Brain on the city's approach to the Boil Water issues of December and January

Beyond the video presentation, Friday afternoon's release of information also included the city's After Incident Report, the documentation of the incident includes a review of the events, as well as steps the city took to inform the public, an evaluation of the city's response and what city officials have learned from the three month long incident.

Apparently we will never really know for sure if the first tests were a false positive, as the city notes in one of the charts included as part of the incident report.

Unfortunately, there is no way to confirm whether the initial tests were false positives, as the slides were discarded by the first lab. Given the result provided, the regulator (Northern Health) and the City acted in the best interests of public health by putting a Boil Water Notice into effect. 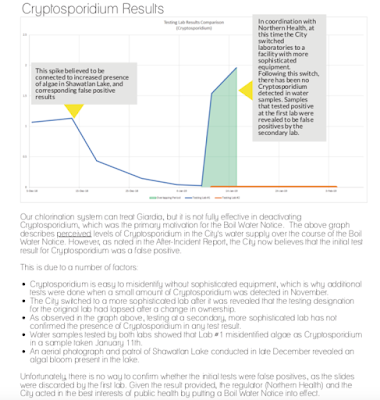 The City's review also looks to the long term plan of development of a water treatment facility for the community, while in the short term, Northern Health has provided some advice for the city to follow for future testing of the water supply.

Given this incident, Northern Health has directed the City to continue to monitor for protozoa at minimum on a monthly basis going ahead, which will be added as a condition of our Water Operating Permit.

The Environmental Health Officer may also request greater testing frequency during times where there is higher risk to the water supply, for instance during periods of inclement weather or higher levels of recorded turbidity in the water supply.

You can review the complete findings from the Report here, with further background from the city also available from Friday's statement on the civic website and Facebook page.

More notes related to the City's Boil Water situation can be found from our archive page here.

To view the most recent blog posting of the day, click here.
Posted by . at 9:24 AM

Email ThisBlogThis!Share to TwitterShare to FacebookShare to Pinterest
Labels: City of Prince Rupert report in the Boil Water situation of December and January