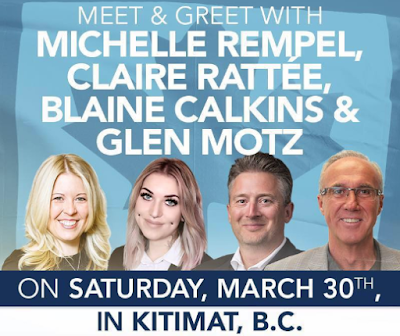 While the NDP make their plans to move forward in the post Nathan Cullen years in Skeena-Bulkley Valley, Conservative nominee Claire Rattée is making plans to host a political event in Kitimat this Saturday as she brings three members of the Alberta wing of the federal party to the Northwest.

Joining the newly nominated Conservative candidate for the riding will be MP's Michelle Rempel, Blaine Calkins and Glen Motz, with all three Alberta MP's in  Kitimat to discuss issues of interest to the region on Saturday from 3 to 6 at the Hirsch Creek Golf and Winter Club.

The Skeena-Bulkley Valley candidate made note of the event through her Facebook page earlier this week. Further information related to Saturday's political event can be found from the event page created for the political get together.

The Saturday Meet and Greet won't be the only political event for the Conservatives, or potential Conservative voters  this week in the region, with Ms. Rempel and the other Alberta MP's hosting a Town Hall style meeting set to discuss firearms issues related to the proposed changes through Bill C71.

That gathering is set for the Kitimat Rod and Gun Club on Friday evening from 7 to 9 PM.

For more items of note related the Federal political scene in the Northwest see our archive page here.
Posted by . at 11:35 AM

Email ThisBlogThis!Share to TwitterShare to FacebookShare to Pinterest
Labels: Conservative MPs in NW this weekend