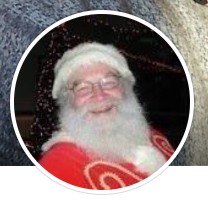 Jim West was known for far too many things around Prince Rupert to count, but four stood out over his many years as the unofficial mayor of Fraser Street.

That of  his sign painting, his resemblance to Santa, his ever faithful Scotties and his love of community.

That love is being returned today as word makes its way around town of the passing of the iconic Rupertite, with many stories of encounters, and shared experiences over his fifty years on the North Coast.

If you look at pretty well any business, or commercial vehicle in town, there's a good chance that you've seen his work.  His prolific efforets making Prince Rupert a canvas of sorts for his skill.

Much of his signature signage was created out of his shop Jim West Signs on Fraser Street, a spot that also doubled as a Santa's workshop of sorts as he made preparations each year to take on the guise of St. Nick.

Flying with his elves of the Coast Guard to and from lighthouse stations along the rocky North and Central Coast shoreline along with that of Haida Gwaii. A journey that was the stuff of legend in Prince Rupert from almost the day that he arrived in the city

His passing of Wednesday was relayed to the community through a posting on Mayor Lee Brain's Facebook page, with the comments section offering an indication as to the sense of loss that many are feeling and the remembrances of a life lived large by the man with the infectious laugh.

You can review those comments and add your own from this link to the Mayor's tribute of Thursday.


To return to the most recent blog posting of the day, click here.
Posted by . at 9:27 AM

Email ThisBlogThis!Share to TwitterShare to FacebookShare to Pinterest
Labels: The passing of Jim West