The District Council in Port Edward has called attention to an issue of concern in the community when it comes to the safe disposal of discarded needles, with the District noting that their public works crews have discovered a growing number of needles discarded throughout the community. 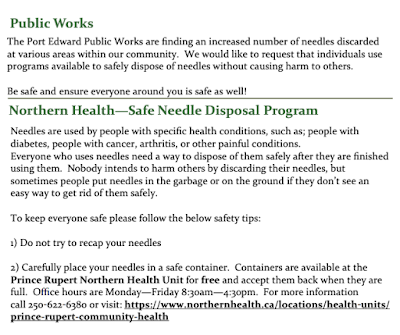 As the District notes in their advisory, Northern Health does offer a container program on the North Coast to provide for the safe disposal of needles in the region.

One idea that Port Edward or Prince Rupert community groups may want to follow up on is a program in Terrace that has been funded by Northern Health's Imagine Grant initiative.

In the Terrace case, The Terrace Clean Team addressed discarded needles and such by creating a clean up team which used Safe Injection Boxes and puncture proof gloves through funding from the grant.

Terrace Council explored the needle issue extensively last year and their findings make for an interesting look at how the issue has been handled across the Northwest.

More on the Imagine Grant program can be found here.

The Northern Health Unit is located in the Ocean Centre on the Third Avenue West Side of the building, you can also contact them at 250-622-6380.

For more items of interest from the District see our archive page here, while further background on Northern Health can be found from our Health Archives.