Electric Vehicle charging program could be powered up by 2020 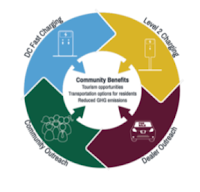 The path ahead towards the era of the electric car was outlined by Prince Rupert Mayor Lee Brain on Monday night, as he provided City Council with a snap shot of plans to create an electric vehicle charging station program along the Highway 16 corridor.


At Monday's Council session the mayor outlined the plan for EV charging stations that will  stretch from Haida Gwaii  and on further into the Cariboo along Highway 97 South.

In his presentation, the Mayor outlined the work of the advisory council, which he is a member of,  and how it is working towards introducing the electric vehicle stations across the Northwest.

As the Mayor explained it, the organization a partnership of five regional districts across the North is now known as Charge North and is currently developing its blue print of what the program of charging stations, to be located approximately every 60 kilometres along highway 16 will look like once it moves forward. 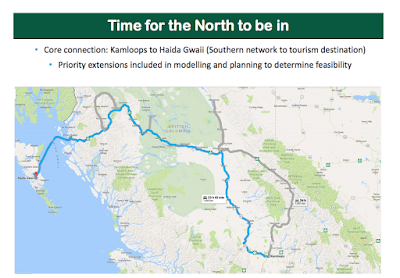 Mr. Brain noted that the bulk of the financing will come by way of grants through a range of funding programs, while each Regional District and municipality is required to contribute what the Mayor described as a small amount towards the initiative.

The work of Monday evening as the Mayor observed was to consider the resolution in front of Council, which was designed  to move forward the City's participation in Charge North.

A plan that would put in motion permission for City staff to explore and map out locations in Prince Rupert for the charging stations.

Depending on the preference, the cost of the stations would be either $2,000, or $5,000 towards whichever station they choose to go with and how many they wish to place in the city.

"If we were to do this independently it would be significantly more, but since we're applying as a massive group of communities across five regional districts, the cost is 2500 basically per community per station"  -- Mayor Lee Brain on the regional approach towards a charging station network along Highway 16

Mr. Brain also noted for Council, how the North Coast Regional District will be considered the lead applicant for the program and will also install a station, with one on Haida Gwaii and another on the North Coast.

We reviewed some of the background to the Regional District involvement with the project last month with this note on the quest for funding for the program.

A few of the Council members offered both statements of support towards the initiative, as well as to ask a few questions of the Mayor on the proposed charging station network.

Councillor Randhawa inquired as to the kind of timeline that the Mayor is looking at; Mr. Brain observed that if all goes well, there could be stations in the community as soon as next year.

Councillor Adey spoke in favour of the initiative, asking about if there were any concerns related to vandalism.  He was advised that there were concerns, noting that the highway stations would be installed by BC Hydro, as for repairs, any stations that may be damaged will be the responsibility of the host community.

Councillor Cunningham offered his support for the program, but had a question on what the charging time difference between Stage One and Stage Two stations was.

The Mayor noted that the difference was that Level Two is anywhere from a two to four hour charge, while Level Three is a thirty minute charge.

Mr. Brain added that these stations are also to double as a tourism piece as well, with displays to be part of the station to encourage those using the station to explore the community and its amenities.

Mr. Brain also noted that the standard for most communities is to be the Stage Two machines at $2,500 each.

For his part, Mr. Cunningham observed as to how problems could arise with the lower range chargers; with residents or visitors waiting to use them, the mayor did note that local residents would be able to charge their vehicles at their own homes.

The initial phase of the program would be a five year contract for installation and maintenance on the units to be placed in each community along the corridor, with options for renewal past the first five year term of the contract.

With a due date of March 15th fast approaching, the Mayor noted that the Council session was the night to get things done towards moving forward with the program.

You can review the full presentation from the Mayor through the city's Video Archive, starting at the 26 minute mark.


More background on the Mayor's themes of Monday can be found from our preview of Monday night's presentation, which you can review here, it includes some of the material that the Council members had a chance to look over related to the proposal.

Further notes on sustainability issues championed by the City of Prince Rupert can be found on our archive page here.