For the most part ... it was a dis-engaged community for Council's first Budget engagement process


The call for comments for the 2019 Budget process did not exactly bring out the crowds on Monday evening, with only two members of a small gathering in the City Council Chamber speaking to budget themes at the first of two scheduled consultation sessions.

To launch the 2019 Budget community engagement process, Corinne Bomben, the City's Chief Financial Officer, provided for a short review of her larger Budget Presentation of two weeks ago, with the CFO using a number of slides as part of her Cole's Notes revisit of some of the key elements of the Budget presentation of February 25th.

Among her main themes, the delivery of a budget surplus, proposed two percent property tax reduction and how the city will make use of some of their spending from the surplus, with additions to the roll call at the RCMP detachment and the city bylaw office.

When it comes to the impact of the budget on taxpayers,  the CFO used the example of a home valued at 268,000 dollars to provide a guide as to what taxpayers contribute per day to access the range of municipal services offered by the city. A follow up graph offered a wider overview of the services that are funded by the taxpayer. 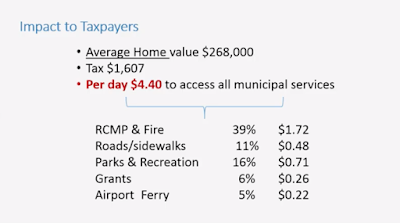 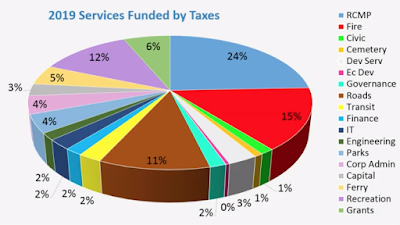 The short synopsis of the Budget plan also included a video  of some of the work that took place in Prince Rupert through 2018. Featured among the themes of the three and a half minute video of civic achievement; was a tour of local parks both human and canine, as well as celebrations of the opening of supportive housing and the Pembina LPG construction of Watson Island.

Also included as part of the twelve months of look what we've done,  were pictures of a new fire truck, the new public works offices, renovated Jail cell and work on a range of infrastructure projects. As well, the pictorial guide included a healthy selection of snap shots of the Mayor, a few of council members and the obligatory nod towards the city's Holy Grail of the Hays 2.0 Blue print.

However, not making it to the final director's cut of the year that was  ... were pictures of Prince Rupert residents spending their Christmas holidays boiling pot after pot of water well into January, that  following the declaration of the Boil Water Order of mid December, related to our drinking water from our supply at Shawatlan and Woodworth Lakes. 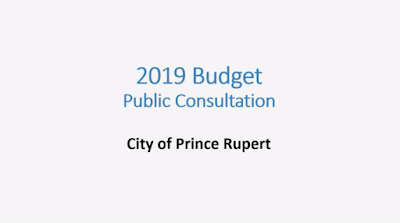 When it came time for comments from the Public, only two residents spoke to the Budget issues on Monday evening.

Mr. Terry Sawka who most recently appeared at council to discuss the retail cannabis plans for Park Avenue,  inquired about the built in Ferry charge that each airport user would find as part of their airline ticket, inquiring as to the scope of that charge. He was advised that the cost is 19 dollars per adult one way, making for a thirty eight dollar charge on the airline ticket for those travelling both ways.

Mr. Sawka also inquired as to whether there were any thoughts towards putting a two cent a litre tax on gasoline sales in the city, much like they do in Vancouver, with any revenue from that tax to be put towards road repairs across the city.

Miss Bomben observed that while a great idea, the city does not have the authority to impose such a tax, noting that Vancouver has its own charter to operate under.

He suggested that Council follow up on the idea for potential use in Prince Rupert.

Providing for the final public comments on the night was Mr. Nathan Randall, who in addition to being a resident of the city, works out of the Prince Rupert offices of ecotrust Canada where he coordinates the work the North Coast Innovation Lab,

Mr. Randall spoke to the proposed two percent tax increase and offered up the suggestion that it be reduced to one percent, or that the council instead just freeze taxes for this year. As part of his observations on the Budget for Council, he asked that they consider redirecting the money that would be used for the tax cut towards community grants and community projects, observing how that funding would be a significant contribution towards portions of an organization budget.

The few comments that were offered up to council on the night took less than five minutes, and with no more members of the public coming forward, the public consultation was brought to a close by 7:21 PM.

The full presentation of information and comment to Council on Monday evening can be reviewed from the City's Video Archive of the Council session, the Budget theme is explored from the start of Council's work.


As the Chief Financial Officer also noted in her presentation the public can also participate in the Budget process through the Rupert Talks initiative, where more background on the Financial plan is available.

As well she noted that the city is hosting a survey, with questions for the public to answer to help Council members with their decision making. 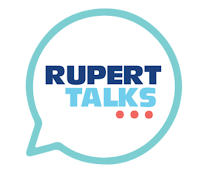 Among the questions for survey takers to consider a question seeking the opinion of the public on how the Ridley Island Tax Sharing Agreement with Port Edward should be approached, opinions towards the work of the City and Resource Benefits Alliance on provincial tax revenue issues, whether residents of the city would be willing to pay for parking in the downtown area.

The survey also includes questions related to the proposed two percent tax cut and whether the Province and not the city should take the financial hit on Port property taxes. The survey also seeks to determine how aware the public is about the need for the city to take on debt to finance the water dam, required new RCMP detachment and the solid waste landfill cell.

Registration is required to participate in any of the Rupert Talk's initiatives, you can learn more about the new communication program from the City here.

Ms. Bomben also noted that a paper copy of the survey will be made available at City Hall, the Library and the Recreation Centre.

As for one more in person opportunity to share some thoughts with the Council membership, the last public engagement session for residents comes up on March 25th, as part of the regular Council session that night.

If anyone in the community has concerns or comments not only on the city's financial plans for the year ahead or to the less prominent theme of the City Council salary recommendations, that will be the final chance to express those thoughts before Council gets down to the work of making their final decisions.

The lack of participation for the first session of Monday, seems to follow a theme of dis-engagement of the public of late when it comes to the business of City Hall, a trend that was reinforced by the low voter turnout of October.

If those living in the community wish to actually have a say in how the city approaches the work of budget making and spending the financial resources of the city, March 25th is the date to circle on the calendar.

You can review some background on the Budget Process from our archive page here.