2019 is shaping up as the year that Prince Rupert's much documented housing needs began to see some much awaited progress.

First with the completion of the Crow's Nest Supportive Housing facility which held its Grand Opening last week and is now almost ready for tenants.

And now,  rising over the east side of the city, the footprint is striking at the Metlakatla led Elders/Seniors complex.

That facility, which is still under construction,  recently reached a milestone moment. That with the placement of one of its two signature pieces of the Coast Tsimshian inspired hats on the western wing of the building.


Approved back in the summer of 2017, the main facility, which will host 32 units for Elders and Seniors is to be based on the design of a Medicine Wheel is now for the most part fully framed up, with the first of the two accent pieces atop the structure put in place last week.

An additional ten units of row housing will also be part of the complex running along Seventh Avenue East.

The funding for the much needed increase in housing stock for Seniors and Elders on the North Coast was provided by the British Columbia government as part of an agreement with the Metlakatla Governing Council. 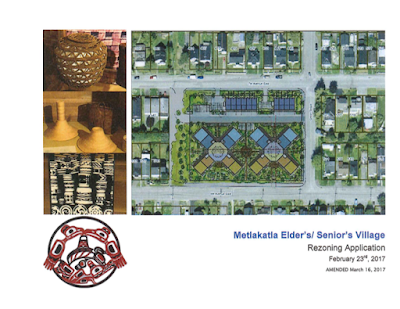 The project received some high praise from Prince Rupert City Council two years ago, as then Councillor Joy Thorkelson described it as exactly the kind of development the city needed, with Metlakatla officials receiving praise from Councillor Barry Cunningham for how they had put the entire project together.

While the work continues on at fairly good clip these days, Metlakatla has not as  of yet, outlined any timeline as to when the building will be finished and will be ready to accept its first tenants.

You can learn more about some of the history of the project below:


Further notes related to housing in the Northwest can be found here.


To return to the most recent blog posting of the day, click here.
Posted by . at 9:17 AM