Lax Kw'alaams to test BC government jurisdiction over energy projects

The Lax Kw'alaams Band has taken their concerns over how the British Columbia government views energy projects in their community to court, with legal counsel taking part in a  court action  last week to speak towards a provincial proposal that Lax Kw'alaams officials say would limit their ability to develop their reserve and territory.

In an update posted to the Lax Kw'alaams website on Saturday, the Band Council provided some notes towards the background to the dispute and how it may impact on the community in the future.

Along with the federal government and the provinces of Saskatchewan and Alberta, Lax Kw’alaams Council feels the British Columbia government does not have the jurisdiction to effectively veto new energy projects which would bring economic benefits to communities such as Lax Kw’alaams.

The Band is always looking for other sources of economic opportunity for the Lax Kw’alaams people. The Council objects to having the Band’s needs, aspirations, rights and options in its traditional territory thwarted by proposed legislation without an opportunity for consultation.

The Lax Kw'alaams argument was delivered on Thursday, as part of a wider challenge from a number of participants, towards provincial environmental legislation that has been crafted with the Trans Mountain pipeline in mind.

The BC plan would require permitting through the province before any projects can move forward, in response to that provincial plan, the Federal government has also made an argument that British Columbia does not have jurisdiction over province to province infrastructure.

As part of their Saturday information statement, one proposal that the Band makes note of in relation to their concerns over the province plan, is how it may have an impact on the Eagle Spirit Energy pipeline project, which is being championed by Calvin Helin, who is the brother of Lax Kw'alaams Mayor John Helin.

In their update for members, the project is described as follows:

An oil pipeline proposal known as Eagle Spirit Energy is one proposal that could potentially bring jobs, training and economic activity to Lax Kw’alaams. Eagle Spirit Energy is not a Band project, and has not been reviewed by Band Council or the community, but served as one example of the sort of economic opportunities that could be eliminated by government interference in our traditional territory.

As we have noted in the past, Eagle Spirit has been putting forward its proposal for an oil pipeline to the North Coast for a number of years now, with Grassy Point near Lax Kw'alaams one of the areas identified for a potential terminal facility. 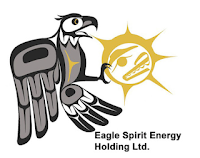 Eagle Spirit has been very vocal in opposition to the Federal Tanker Moratorium plans of Bill C-48, that legislation is currently working its way through the Senate, with plans  reportedly being considered to hold community engagement sessions in Prince Rupert and Terrace sometime in the near future.

As for the  legal proceedings that Lax Kw'alaams participated with last week, Band officials  are expecting the process to deliver a decision in the months to come.

The full statement from Lax Kw'alaams can be reviewed here.

You can explore some of our past notes on the Eagle Spirit project here.

For more notes on the political aspects of the court proceedings of the last week see our D'Arcy McGee portal and our daily archive of notes Victoria Viewpoints.

More items of interest related to Lax Kw'alaams can be explored here.

Email ThisBlogThis!Share to TwitterShare to FacebookShare to Pinterest
Labels: Lax Kw'alaams challenge to BC Gov't plans for permits