As they head into Day Three of the Coy Cup competition the Prince Rupert Rampage have their backs against the wall, with today's match up against the Dawson Creek Canucks a pivotal match for their ambitions to advance towards the finals of the Senior Men's Tournament.

Having dropped their first two games of Tuesday and Wednesday, the Rampage will need a win and volume of goals against the Canucks to try to push their way into the Semi Final on Friday.

The Canucks enter the game today with a 1-1 record having topped Williams Lake on Monday and losing to the host Fort St. John Flyers last evening in a close contest. 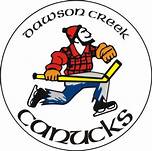 Results which give Dawson Creek no shortage of incentive to make this afternoon a statement game against the Rampage and perhaps seek another shot at their Peace Country rivals.

Heading into today's game with an 0-2 record makes the path ahead much harder for the Rampage who will not only have to beat the Canucks, but fill the net to ensure that goal differential doesn't knock them out of any tie breaker scenarios.

Those margins make the Rupert task a tough one, with the Goals Against and For ratio providing some indication as to their offensive struggles in their first two games.

The GA/GF for all four teams is as follows

The round robin portion of the Coy Cup comes to an end with the Williams Lake/Fort St. John game this evening at 8PM, which will be broadcast live by Fort St. John radio station Moose FM.

The Semi Final game goes Friday evening with the Second place and Third Place finishers squaring off, with the winner to take on the First Place team in the Final Saturday night.

For Prince Rupert, this afternoon's game offers their last chance to try and push themselves into one of the semi final spots to get that Saturday night shot at the Coy Cup.

You can review the tournament so far from our archive page here.