A strong defensive game from the Windermere Rockies shut down the usually strong Prince Rupert SeaWolves offensive attack on Wednesday afternoon, as the team from the Kootenay's claimed the Tier 4 Bantam championship from the defending champs, with a 4-1 victory in the tournament final in front a good sized mid week crowd at the Jim Ciccone Civic Centre.

The two teams blazed their trail to the Championship game after three days of preliminary games with near similar records, in the case of the Seawolves  3 wins and 1 tie through the early play of the tournament.

Wednesday however, the Rockies found the extra gear required to pull away from their hosts, building on a lead through the first two periods of play, while making sure that the Prince Rupert shots never created much trouble. 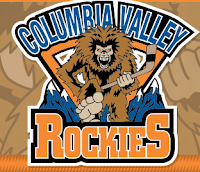 Strong puck control by the Rockies in their own end reduced any second chances for the Seawolves, with the Kootenay team also reduced much of the space in the neutral zone to ensure that Prince Rupert couldn't really get back on their game.

Penalty trouble would prove to be the downfall of the defending champs from Prince Rupert, who found themselves in short handed situations through much of the third period, making for an uphill climb that they never really seemed to get a handle on.

Some chippy play towards the end of the period threatened to get out of hand, but was quickly subdued by the officiating staff who brought the game to an end without any further problems.

Emotions having settled post game, the hand shake line offered up some good sportsmanship, with the Windermere goaltender making a point of making an extra skate to the Rupert blue line to offer a second congratulation to his equal on the Rupert side of the ice.

The medal presentations delivered silver this time around for the Seawolves players and coaching staff, with that ceremony followed by the Gold Medal presentation and handing over of the Banner to the Windermere team for the final snapshots of tournament week.

In earlier play, Fort St. John defeated Prince George 6-2 to claim the bronze medal, Summerland was the fifth team to participate in this years
finale to the Bantam Hockey season.

The five days of the Bantam tournament made for an impressive bit of work by the Prince Rupert organizing committee who made sure that all the details required to put on such a show were taken care of, allowing the players and coaches to showcase their skills in the best atmosphere possible.

Congratulations to Windermere which travelled quite a long way to put their stamp  on 2019, as well as to the Prince Rupert Seawolves for their strong season.

Somehow, we imagine that the two teams may yet cross paths again in 2020, with the Rupert side looking to reclaim their banner for the Civic Centre this time next year.

For more notes on Minor Hockey in the Northwest see our archive page here.

To view the most recent blog posting of the day, click here.
Posted by . at 4:06 PM