Providing for the presentation were Des Nobels and Colleen Fitzpatrick, with the pair splitting up their work to provide for an overall look at rail safety issues.

To open the presentation Mr. Nobels provided a brief review of a recent information night held in January in Prince Rupert, when author Bruce Campbell provided a look at the research he had done for his book Lac Megantic Rail Disaster, offering up some chilling concerns about rail safety and the need for more information, more preparation and more advocacy for community.

Mr. Nobels observed that he had hoped at the time that some members of Council might have attended the event, but due to time constraints he imagined that they couldn't take it in. Towards that he offered a number of copies of the presentation for Council members to view on their own time if they wished.

From his notes he outlined a number of the national rail concerns and then focused on the local situation which he noted is now finding a very different type of cargo mix set to come through the entire Northwest on the way to Prince Rupert.

Noting that in previous years the majority of the freight transiting to Prince Rupert was wood or agriculture products in nature,  the future will offer a significant increase that will deliver much more hazardous cargo mostly hydro-carbon based.

'We in this area I think have some serious issues to consider, we have some very large projects scheduled for the area here, all of them bringing in hazardous materials. We are looking at conceivably up as high as 400 more rail cars a day coming into Rupert and through the communities of the Northwest. These cars will be comprised of mostly hydro-carbons gasoline, methanol, diesel and possibly Bunker C. This creates a problem for our communities"

As for action from Council Mr. Nobels asked for consideration of two items:

He asked that after Council has had a chance to review the material he had submitted and to have read the Campbell book; that Council write to the Federal Transport Minister Marc Garneau and request of him an upgrading of rail safety in Western Canada with a great and hard look at Northwestern BC

Mr. Nobels also noted that the topic will be up for discussion at the upcoming NCLGA meeting and how he hopes the city will take action on those discussion themes. 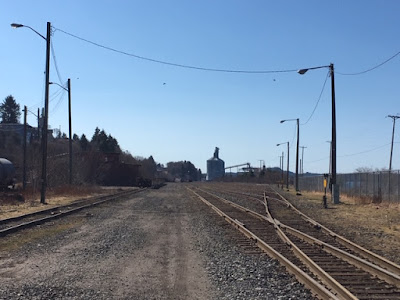 For her part Ms. Fitzpatrick outlined concerns in the community about such issues as emissions, train noise and the potential for major incidents in the Prince Rupert Freight yard area. She spoke of the idling of engines, the release of air  brakes, emissions generated, vibrations from passing train cars and the ongoing shunting that takes place in the rail yard which impacts on the residents of the immediate area.

She also expressed concerns for the potential of derailment that her organization believes is present in the rail yard.

The theme of the Wolverine Marine Terminal also made for some of the presentation, with Ms. Fitzpatrick asking if Council had any kind of update on that project, noting how it literally metres away from some of the homes along Graham Avenue.

The lack of information from CN  as to what is being transported on the trains also made for some of their concerns, as the Society observed how the safety of the community lies in the hands of City Council.

Towards that community safety  Ms. Fitzpatrick and her group had three requests of City Council:

Engage with the Prince Rupert Environmental Society to seek solutions for the rail complaints by entering into the process of resolution by following guidelines of the Canadian Transport Agency.

The third request is that the City to develop an emergency response plan for the health and Safety of the residents of Prince Rupert. To be included as part of the plan will be public input and development of an evacuation protocol.

In comments for the Society following their presentation, Prince Rupert Mayor Lee Brain observed how he had met with the group and the Port last April and would be willing to work with them on their concerns.

"So yes, I did attend a meeting in April to discuss some of these issues with the Port with you guys, happy to re-engage and will review the material that you have submitted here and I think there's a lot as you said, simple solutions that we can work together on. So happy to work with you on that  and we should set up a meeting shortly and begin those discussions"

A look at the full presentation can be found from the City's Video Archive starting at the 21 minute mark.

A wider overview of items related to CN can be found on our archive page here, while further background on Discussion topics for City Council are available here.