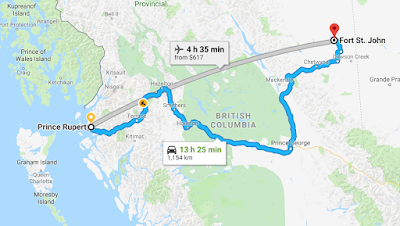 In what will be their longest road trip since joining the CIHL, the Prince Rupert Rampage have made the 1,154 kilometre journey to Fort St. John, with the puck set to be dropped tonight for their first game in the quest for the Coy Cup championship.

As we outlined back on March 1st, the Rampage, along with the Williams Lake Stampeders will be flying the CIHL flag at the Senior Men's Hockey Championship this week, both teams having stepped up for the week long event after Terrace and Quesnel bowed out of their invitations. 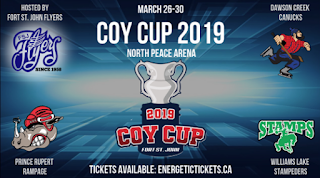 The Rampage open up their week with a match up against the host Fort St. John Flyers with tonight's start time set for 8PM.

Williams Lake and Dawson Creek Canucks will provide for the ice breaker to the Coy Cup tourney, facing off at 3 PM

For Dawson Creek this afternoon's contest marks their first game in defence of their 2018 Coy Cup championship which they claimed in Williams Lake one year ago.

The round robin competition continues through to the Championship game on Saturday night.

The Rampage are guaranteed three games in the opening round, but no doubt will be looking forward to much more time on the ice and a chance to book their spot in Saturday's finale.

The Full schedule can be reviewed below:

The Flyers organizing committee has been busy over the last few months, putting together the final details of the tournament and tapping the Fort St. John for community support for the event which has stirred up some interest in the Senior game as the event got closer.

You can keep up to speed with the tournament developments from the Rampage Facebook page, as well as from the host Flyers Facebook portal.

We will track the Coy Cup notes from this archive page, which will update the scores and provide for other notes from Fort St. John through the week.

More notes to explore on the Rupert Rampage can be found from our archive page here.