One final Super Moon for the year ... but perhaps it could use a PR agent!


If the weather forecast holds true to its prognostication, Spring Break will deliver one final major lunar event for the year tomorrow night, as the last of the Super Moons prepares to rise as we we travel towards spring.

Following on the heels of January's Super Blood Wolf Moon, and the February lunar show of the Super Snow Moon, the third and final instalment of the Super Moon trilogy will be known as the Super Worm Moon.

Perhaps not quite as powerful a moniker as a Super Blood Wolf moon, but indicative of the changing of the season, named for the arrival of spring and when birds start to dig out those first worms of the season.  Though perhaps a public relations assistant could help give the celebration it a bit more polish.

This Super Moon which also arrives with Spring Equinox, will loom significantly larger on our horizon and be 30 per cent brighter than usual. It begins its ascent on the North Coast at 6:43 PM

It's best viewed away from any light pollution of the city and higher elevations offer a better glimpse of the Super Worm Equinox Moon announcing its arrival on the horizon.

The next Super moon event doesn't arrive to rise up in the night sky until March of 2020.

So far, the Weather Gods are cooperating with the prospects from moon gazers for Wednesday evening/Thursday morning, making for one of those rare times when the North Coast can share in on some of the global interest in celestial events. 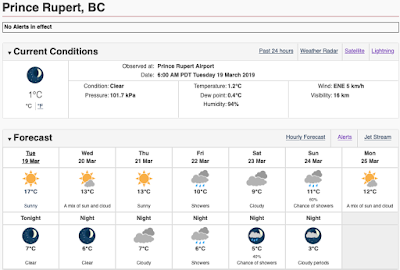 As was the case earlier this year, with the Super moon will come some increased tidal activity.
With a 23 foot high tide a 2:36AM, preceded by a 1 foot low tide at 8:18PM 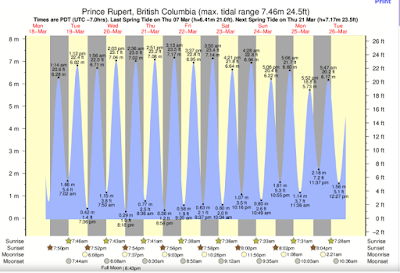 To view the most recent blog posting of the day, click here.
Posted by . at 9:37 AM