The arrival of April will give residents of Prince Rupert cause to work towards a more sustainable future, with Transition Prince Rupert taking the lead on a range of projects through the month to advance attention to the issues of sustainability and community goals.

Monday evening Transition Prince Rupert's Treasurer Sarah Dantzer appeared at City Council to provide an update on the number of projects planned for the month ahead, a list which features a number of clean up initiatives, documentaries and garden swap event to name a few. 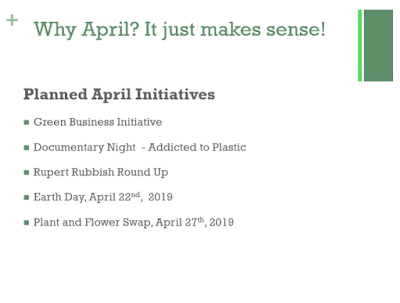 As part of her presentation Ms. Dantzer also expanded on the Green Business Pledge program that will be launched in the community as of April 1st. That program will ask that participants meet five of a list of ten criteria to take part, with stickers to be provided to those businesses that are proactive and engage in Green initiatives. She also outlined some notes related to Documentary Night set for April 12th at the Lester Centre which is by donation, Ms. Dantzer noted how they would be working with Charles Hays Secondary Council in that presentation as a fund raiser for their organization. She also observed that one of CHSS council members is a Direct of the Transition Society and how it's been enjoyable working with him. 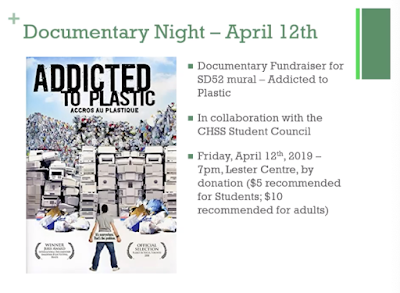 Ms. Dantzer also observed that the Positive Prince Rupert Group will be holding another of their clean up project this month as well set for April 21st.

As part of her presentation she asked that Council provide a proclamation to declare April as Sustainability month in Prince Rupert. Something which Council addressed as part of their Regular Council session later in the evening.

In follow up questions to the presentation, Councillor Cunningham praised the work of the organization and offered a challenge to other Council members to help out with the Rubbish round up, which he will be taking part in again.

Councillor Adey also offered up his support for the work of the organization in the community.

Mayor Brain, who was a founding member of the organization,  also made note of his support for the program's plans,  hailing the work that the group has taken on to raise the program to a new level.

You can take in her presentation from the City's Video Archive starting at the 47 minute mark.

More on the work of Transition Prince Rupert can be found from their website and Facebook page.

Further notes related to Monday's CityCouncil session can be found from our Council Timeline feature, while discussion themes at City Council can be explored in more detail through our Council Discussion archive.