The Peace Country dominated Day One of the Coy Cup with both the host Fort St. John Flyers and Dawson Creek Canucks finding success on the score board in the opening games to the Senior Men's tournament.

For Prince Rupert's Rampage it was  a rough welcome to the Peace as the Flyers found their mark frequently on the way to an 8-3 opening night victory, the Rampage squad not really finding their skating legs until the third period.

A few snippets of the game action have been posted to the Rampage Facebook page to offer up a sample of the tournament play so far.

In the early game, the Williams Lake Stampeders had similar problems with the Canucks, as Dawson Creek which just wrapped up their playoff season a week ago, was able to jump right back into action cruising to an 8-2 victory over the Cariboo squad.

The two CIHL rivals will be the feature attraction at 3 PM today in the early game as the Rampage and Stamps look to bounce back from their Day One disappointment.

The Two northeast teams match up at 8 with the Canucks and Flyers looking to take charge of the tourney with an opportunity to keep a perfect record through the first two days. 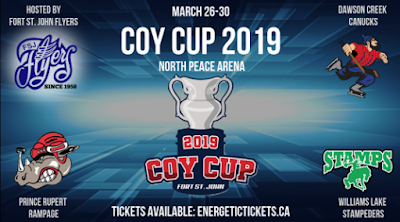 The evening games are featured as part of an audio stream from Fort St. John radio station Moose FM. There are also plans for a live stream of the semi final and final games, however details on that have yet to be released.

For a look at some notes on the tournament see our archive page here.

Email ThisBlogThis!Share to TwitterShare to FacebookShare to Pinterest
Labels: Rough start for Rampage at Coy Cup