Members of the Lax Kw'alaams Band are staging a large demonstration in the waters off of Prince Rupert today, their response to a decision by DFO to announce a herring opening which got underway this week.

Taking to the water was a large flotilla of vessels owned by commercial fishermen from the community who will looking to interfere with the fishing operations of the one license holder that has been granted access to a herring spawn on kelp opening in the Central Coast and Prince Rupert area.

The DFO Notice lists the Central Coast and Prince Rupert Area four as having been opened as of March 22nd.

This notice opens portions of licence areas within the Central Coast and portions of the North Coast for commercial harvesting of spawn on kelp. Areas 3, 4 and 10 are open under a precautionary management plan to guide operations. 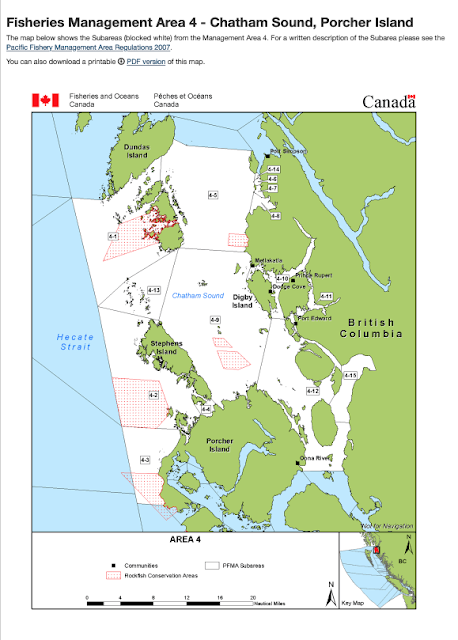 The decision by DFO to go ahead with the opening comes after representatives from the Lax Kw'alaams Band and Metlakatla First Nations provided local knowledge and advice that all commercial herring harvesting must cease until herring stocks recover.

“The Lax Kw’alaams and Metlakatla Councils, technical staff, and membership all agree the herring stocks within the Prince Rupert district are too small and do not support commercial herring or herring roe fisheries. Yet DFO is still allowing one licensed boat, owned by a non-Indigenous individual, to fish until May 1st.” --  Lax Kw’alaams Mayor John Helin.

The Lax Kw'alaams demonstration of today is expected grow larger  and continue for weeks as Metlaktla boats join in,  it's expected that the two area First Nations will keep the pressure on the Department of Fisheries agrees to a plan that works for all sides.

As we outlined last December, in late 2018 the Metlakatla Aquatic Resources office had outlined a number of concerns for the 2019 season, the dire state of the herring resource was further noted in February when UFAWU-Unifor noted that there would be no herring season this year.

It's not clear at the moment, why DFO may have altered the original notes of the last four months.

You can find more on the Lax Kw'alaams concerns from their statement of this morning.

For more notes on the fishing industry on the North Coast see our archive page here.


To return to the most recent blog posting of the day, click here.
Posted by . at 3:08 PM